In the interest of full disclosure, I will let you know now that I am not a hardcore gamer. I love video games. I have loved video games from the time I was a young child and we got our first Atari console. I’ve moved with gaming as the industry and tech have moved with it. I’ve gone from Coleco to Nintendo, from Sega Genesis to Sega Saturn. I’ve fashioned computers to play the latest MMORPG and play all of the next gen consoles (I still don’t have a Nintendo Switch yet, but it’s on the list). I love video games in the sense that I love to play them. I say all this to reiterate that I am not a game expert before you start sharpening your knives and stakes (I’m looking at you the entire Internet) That being said, my first video game review for Geeks World Wide will cover three categories: Gameplay (How easy is it to play the game?/How challenging is it?), Graphics (How does the game look?) and Replay-ability (Will I play this game again?)

The game is Table Top Racing World Tour from Playrise Digital. It was released for the XBOX One March 10, 2017. It is a multiplayer racing game with the twist that all of the cars are miniature in environments that simulate real life. The vehicles are reminiscent of Micro-Machines in how they look and many of the levels are made to resemble common backyard motifs. As far as the gameplay, it’s not bad. Nothing about the control scheme or car upgrades available are anything revolutionary. The controls are simple to operate and the overall gameplay is easy to navigate. There is a short learning curve to pick things up which is a plus for the casual gamer. For more seasoned veterans of both gaming and racing games specifically, it will quickly feel repetitive. The levels are fun to play though when you hop on to give it a quick play. 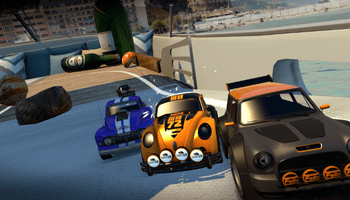 Graphically, it doesn’t really push the envelope, but it looks good all the same. The courses and car designs really emphasize the sense of scale of the levels and the courses more smoothly with some limited challenges that can be overcome after the first lap. The backgrounds are well rendered and the cars all look good. The developers definitely seemed to be going for a certain kind of nostalgia and on that they delivered.

By and large, I normally play games either alone or with friends on multiplayer. This is one of those games that I decided to enlist some special help with. That help came in the form of my ten year old son Jack. Jack is a hard core racer both in Pinewood Derby for the Cub Scouts, but also in his love of racing games. Both of us sat down and played both together and separately and I can tell you that he is absolutely interested in playing it again. He has already expressed interest in upgrading his car and has openly challenged me to beat his time during one of the time trial levels. While it’s not something that I would race home to play as soon as I put down my stuff, it is fun enough to turn on and dive into for a quick race either alone or with someone else.

Overall, Table Top Racing World Tour doesn’t innovate, but it is fun. It has a level of nostalgia that is worth revisiting and is just challenging enough to be considered a fun time with friends or family.