Jonathan Hickman promised a rebirth of the X-Universe and boy! He wasn’t kidding!

In just four short months the scribe and a handful of talented creators delivered on one of the biggest X-Men story-lines the franchise has ever seen. This has led to a resurgence of interest from new and old fans alike; placing Marvel’s merry mutants back at the forefront of the publisher and front and center of the comic book world.

WARNING! THIS LIST CONTAINS MAJOR SPOILERS! READ THE SERIES FIRST AND COME BACK TO ENJOY THE ARTICLE!

1.The Many Lives of Moria 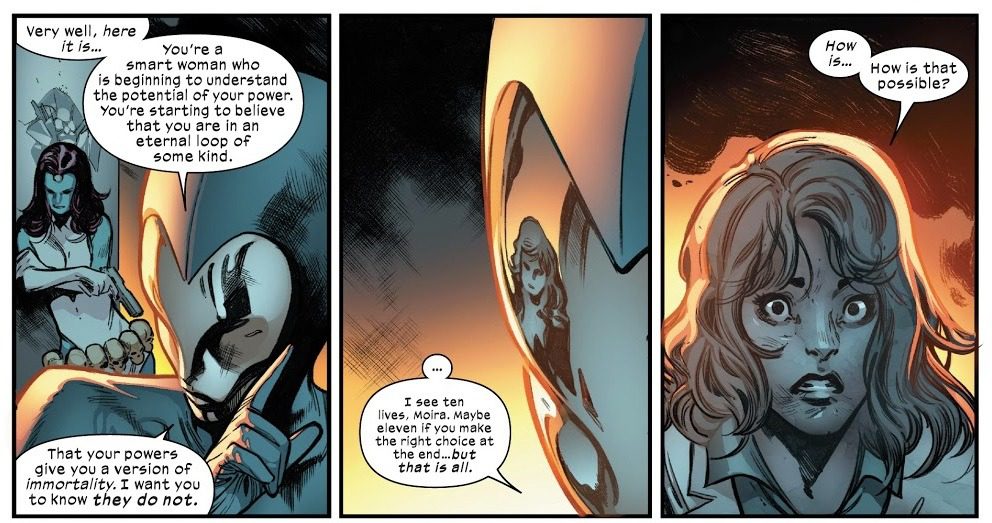 Moria MacTaggert has been a throw away character for years. Once the Scottish love interest for Prof. X and Banshee, she was the mother of the reality warping mutant Proteus. For years Moria worked in the background of the X-books as a scientist and researcher, never really developing as a character. Hickman changed all that. Now this once F-list character might just be one of the most important characters to ever grace the X-Men.

MacTaggert has been re-imagined as a mutant with the ability to reincarnate with the memories of her previous lives. She is living in an ongoing loop where she is struggling to help mutants survive the human race. She is currently on her tenth life, having died in the previous lives trying everything from peaceful co-existence to rebellion to dictatorship… but nothing has proven successful. In this current reboot we find out that its Moria pulling the strings which sets the entire series into motion. 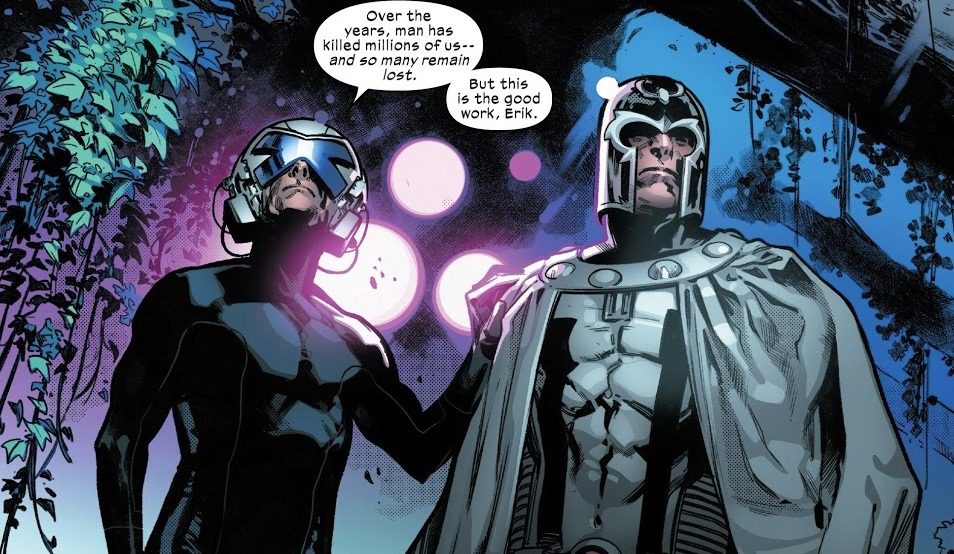 When it comes to the question of who is the greatest villain in X-Men history? The popular answer is the master of magnetism, Magneto. The relationship between Charles Xavier and Magneto is long and storied. From the early days before the formation of the first class of X-Men, when these two men were best friends. To the more recent days when Prof. X and Magneto have buried friends and family battling against each others ideology. In this new future both Charles and Erik have been convinced by Moria that only by agreeing to work together for a common goal and a common dream will the mutant race survive.

While the idea of Mags standing on the side of the angels is not a new one, it is still jarring to see these long time rivals put aside their differences and change the world.

3. Home Sweet Home (that is also a living island and mutant) 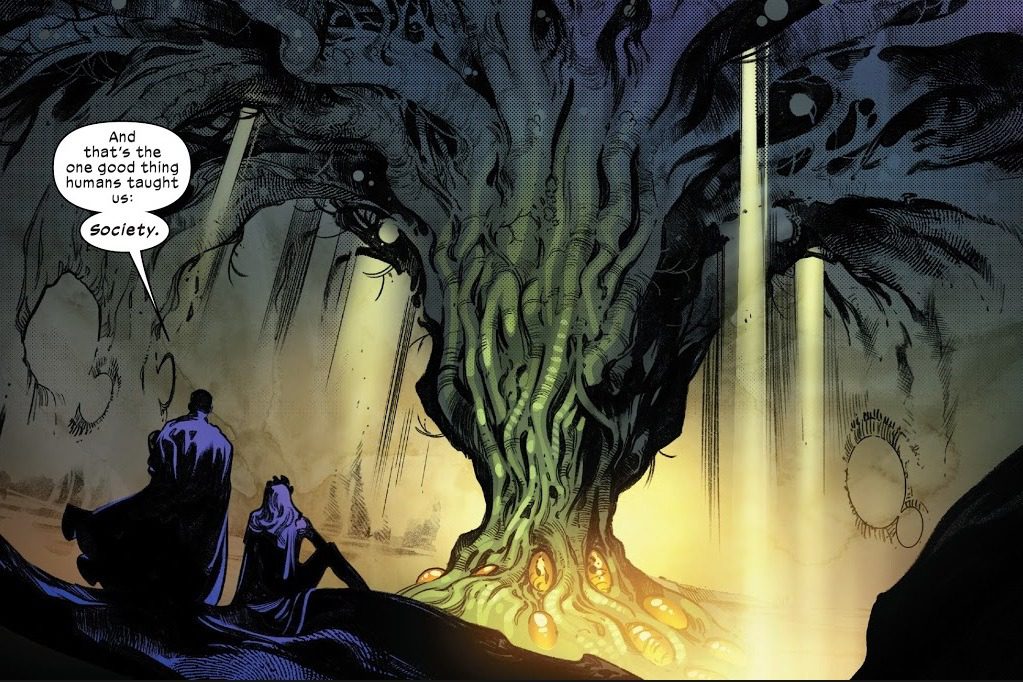 In another move of taking what was a throw away piece of X-history and using it to spin gold, Hickman has turned the living mutant island of Krakoa into the new mutant utopia. Krakoa plays a vital part in the reboot; not only is the living island home to all of the world’s mutants, but is also the source of brand new forms of technology and medicine. Three of those medications are offered by Xavier to the rest of the world in exchange to have the world powers recognize Krakoa as a sovereign nation. The island has also shown to have the ability to open portals anywhere in the galaxy and has even helped form the first mutant language.

While the X-mansion has long been the X-Men’s base of operations, now it seems that the mutants finally have a place to call their own, but even as there has been reason to celebrate as mutant-kind settles in, there has been a reveal that shows that Krakoa is another part of the mystery that surrounds this new series. As the characters gather on the island in the Pacific we are shown another map for a different Krakoa…in the Atlantic. 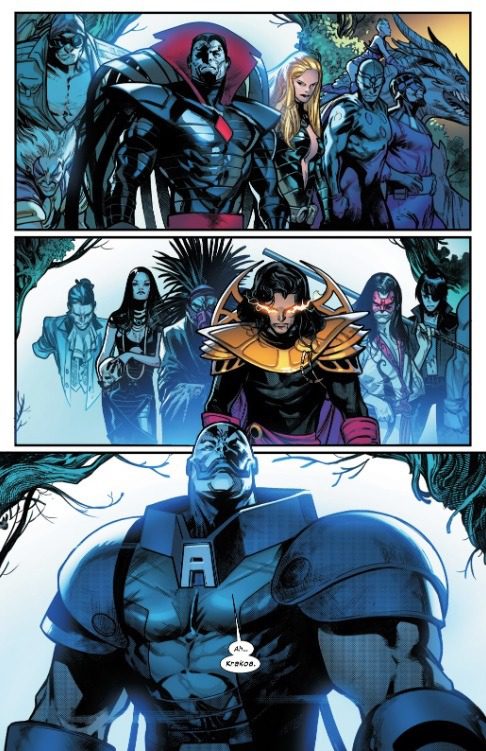 Since Charles Xavier made a telepathic announcement to the world that there is a new safe haven for mutants the call also went out to every mutant alive that they were welcome to come live on Krakoa. All past aggression and violence have been forgiven in an effort to create a real mutant utopia.

We watch as the floodgates open and many faces from the past, both good and evil, emerge to take residence on the island.

While it might be strange to see Magneto and Prof. X working side by side, nothing could prepare X-fans for when Apocalypse himself stepped through the portal. Not to mention some of the X-Men’s biggest foes are now their neighbors, as readers saw longtime villains like Mr. Sinister, Mystique, Emplate, the Mutant Liberation Front, and many others join their ranks. Not only has Charles opened his “home” to former adversaries, but he has also given Apocalypse and the Hellfire Club a seat of power on the mutant council. 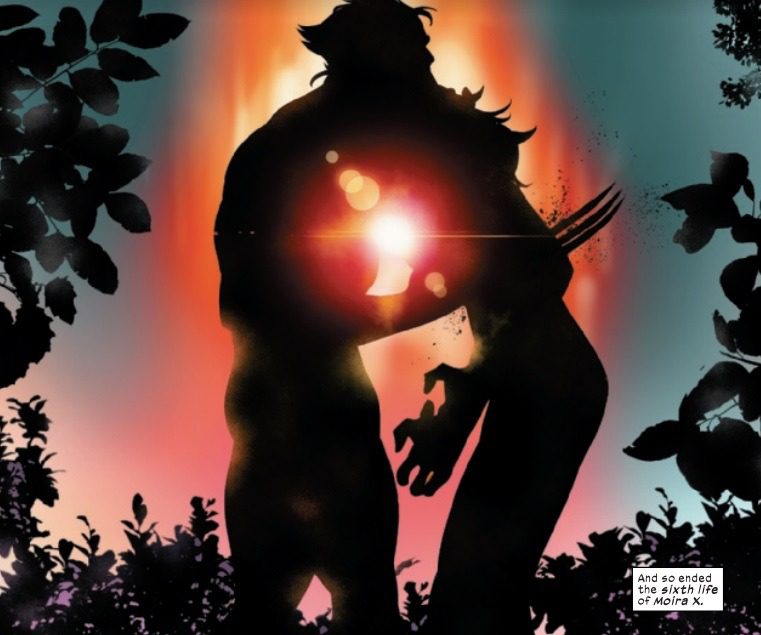 Hickman and company weren’t satisfied with just rebuilding the modern X-Men and overhauling the franchises history, nope! They also went one thousand years into the future to show the fate of the X-Men.

In the distant future man and machine have merged to create a new species, Homo-Novissima, a species that is something even more evolved than mutants. As the planet is facing assimilation at the hands of Phalanx, readers get a glimpse of the last two mutants alive. Moria and Wolverine. Kept alive in a wildlife preserve and observed by an entity called The Liberian. In an effort to save the world Moria sacrifices herself to go back to her regular timeline to be reincarnated, leaving Logan as the last mutant left on Earth. 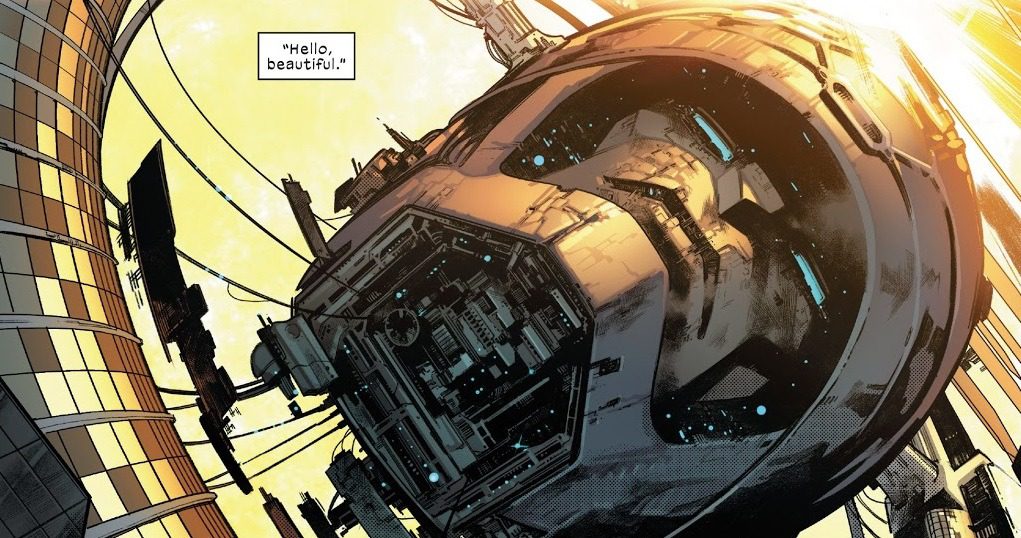 Early on it is revealed that humanity had a contingency plan if the mutants ever tried to eliminate humans. A group known as Orchis (which is made up of various members of human organizations such as A.I.M., S.H.I.E.L.D., Hydra, Alpha Flight, and others) created a space station outside the orbit of the sun that is built around the head of a Mother Mold Sentinel. The idea is to mass produce the mutant killing robots to stop the rise of mutant kind and make it safe for humans.

7. Death is Just the Beginning 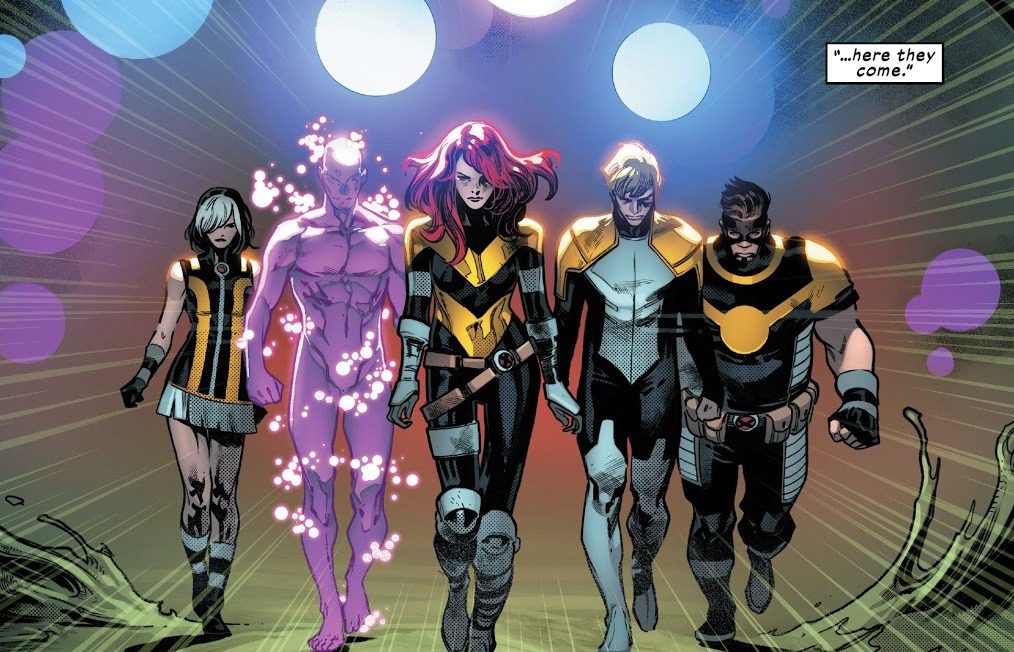 In what was one of the biggest moments in the series, Hickman was criticized for introducing a method of resurrection for mutants. After a group of X-Men travel into space to destroy the Mother Mold, most of the team doesn’t make it back alive. It’s then revealed that Prof. X and Moria have discovered a way to save mutant memories and personalities inside of Cerebro. By using a combination of five mutant powers (provided by the mutants Gold Balls, Proteus, Elixir, Eva Bell, and Hope Summers) the X-Men can be reborn countless times. Making the team immortal.

8. A Seat on the Council 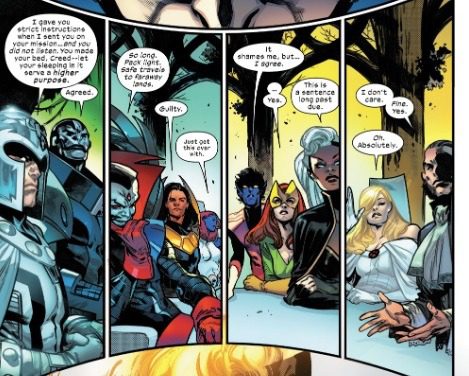 As the new nation of Krakoa took shape one of the first things to be established was the government. Enter the Quite Council, a group of selected leaders that include Professor Xavier, Magneto, Emma Frost and Sebastian Shaw, Apocalypse, Mystique, Mister Sinister, Exodus, Storm, Marvel Girl and Nightcrawler. At the series end there was one seat remaining empty, the seat of the Red King…A position that I’m sure will be filled soon. 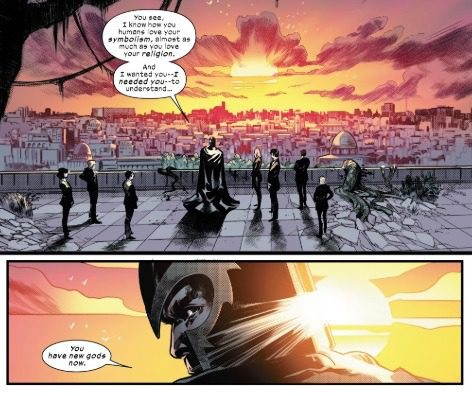 Even though Xavier and Magneto are working together they still care very different approaches to dealing with humanity. This is clear as Xavier offers three new wonder drugs that will heal and help mankind. In one of the most dramatic and powerful exchanges in the first issue of House of X Magneto tells a group of ambassadors that he needed them to understand that humanity has new gods now. Yikes! 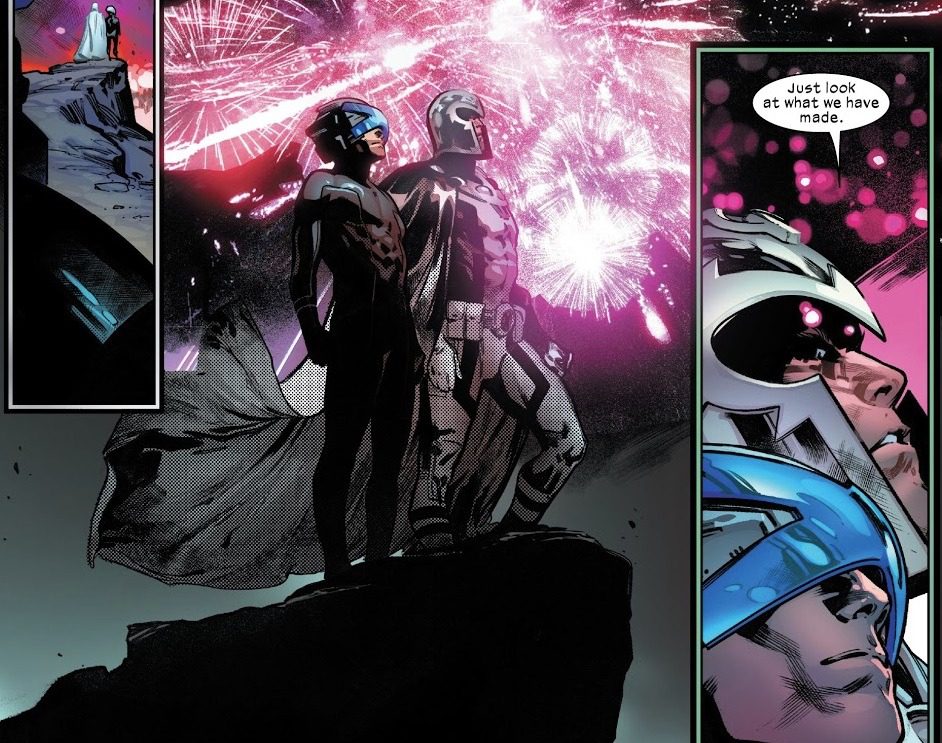 There was a wonderful moment at the end of this series where characters and readers alike got to bask in the celebration of victory. Since the title of X-Men began all those years ago in 1963, there have been very few moments that the children of the atom have been able to celebrate. Now with a place to call home, the old fights settled, and the humans at bay there was finally a moment to cheer and enjoy a hard won victory. But X-Fans know all to well that the celebration never lasts. Trouble is on the horizon and with it new challenges.