In Tesla vs Lovecraft you play as Nikola Tesla, a world renown inventor whose experiments have somehow unleashed the spooky horrors of the fantasy author, H.P. Lovecraft. The game starts of with a short cinematic cutscene where Tesla seems to have unleashed Lovecraft’s monsters with one of his crazy inventions. The narrative is very vague and doesn’t really show how these two realms came to be, save for the short cutscene monologue. The Gameplay, however, is the bread and butter of this quest.

Tesla vs Lovecraft is a top-down, twin-stick shooter, meaning you use both thumbtacks to control and shoot while looking down from above. After the cinematic intro, you begin with a brief tutorial which does a great job of teaching you the upgrades, controls and abilities. It’s all of the upgrades that you earn during gameplay that keep you alive. You level up as you slay dozens of hoards of monsters.  Each time you level up the enemies grow stronger and you gain access to choose between two random upgrades. These upgrades greatly increase your chance of success and they can be huge buffs, extra health, abilities to dodge, and some extra perks.  Running through the levels and gaining experience grants you access to an abundance of upgrades, some more rare than others. Once you collect certain Tesla parts you will start each encounter in a giant, static-powered mech. You can easily tear threw hoards a lot easier, though the mech ability doesn’t last long. 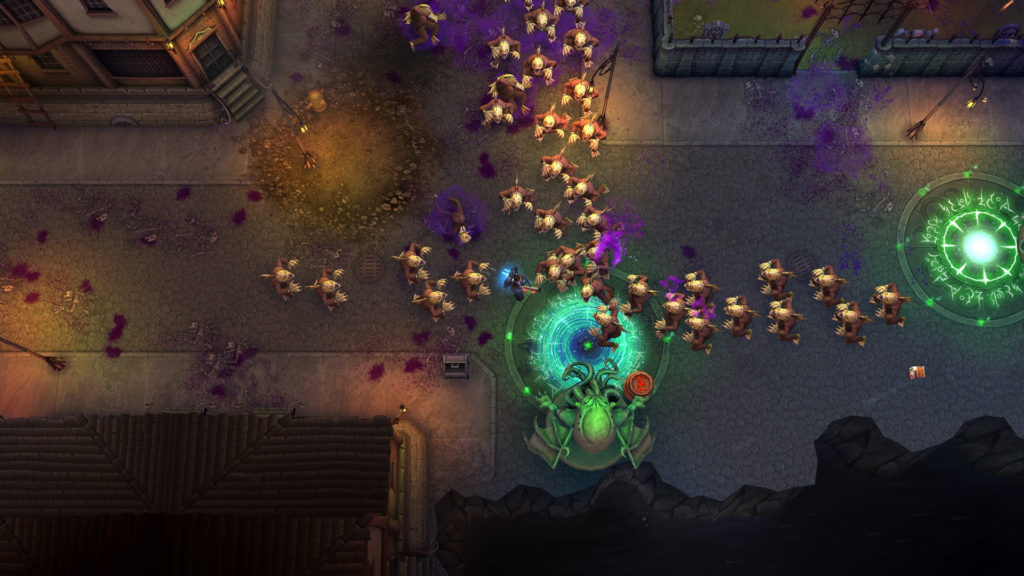 Eventually, your mech will explode and you’ll be reduced to an unarmored Tesla, underpowered pistol whipping Tesla. You’ll need to collect its parts from around the map if you want to temporarily power up again. There will be plenty of item drops on the map as you whiz through the landscape. You can replace your pistol with everything from a repeater shotgun to a tommy gun, to one of Tesla’s invented weapons. Health packets and secondary abilities, like an x-ray sword and shields, can be grabbed also.

There are a series of permanent upgrades available, like increases to the mech’s armor, that require Aether crystals, found in story missions or by completing some ‘quests’ i.e killing 1000 goblins. You can also start picking up these crystals once you’ve played through the story on its normal difficulty.

The game mechanics are pretty easy to grasp and very clean. The graphics are stunning and run smooth with no lag even on mobile. The gothic scene has beautiful colors and really paints a wonderful scene throughout Tesla’s travels in the world.  The smooth gameplay and fun mechanics are great to pickup and play on a whim however the game does eventually run dry after about an hour or so. There isn’t very much diversity in the levels and no other modes expect an endless hoard mode which is exactly what it sounds like. Waves and waves of monster against the poor lad Tesla. I would have liked to have a little more content and diversity in the levels. You can beat the game in around 5-6 hours solo but you do get the option to run through on co-op without at any given time. On the go I was able to split the Joy-Cons and play with a friend however it is extremely difficult to maneuver without the twin sticks.

Overall the game had smooth gameplay and mechanics which were easy to grasp while providing a fun experience on the go or just to pick up when you want some time to kill. Its fast pace and witty design make it a neat purchase however its short story and lack of options make it kind of bland. Nevertheless, you will enjoy your time with Tesla and Lovecraft.