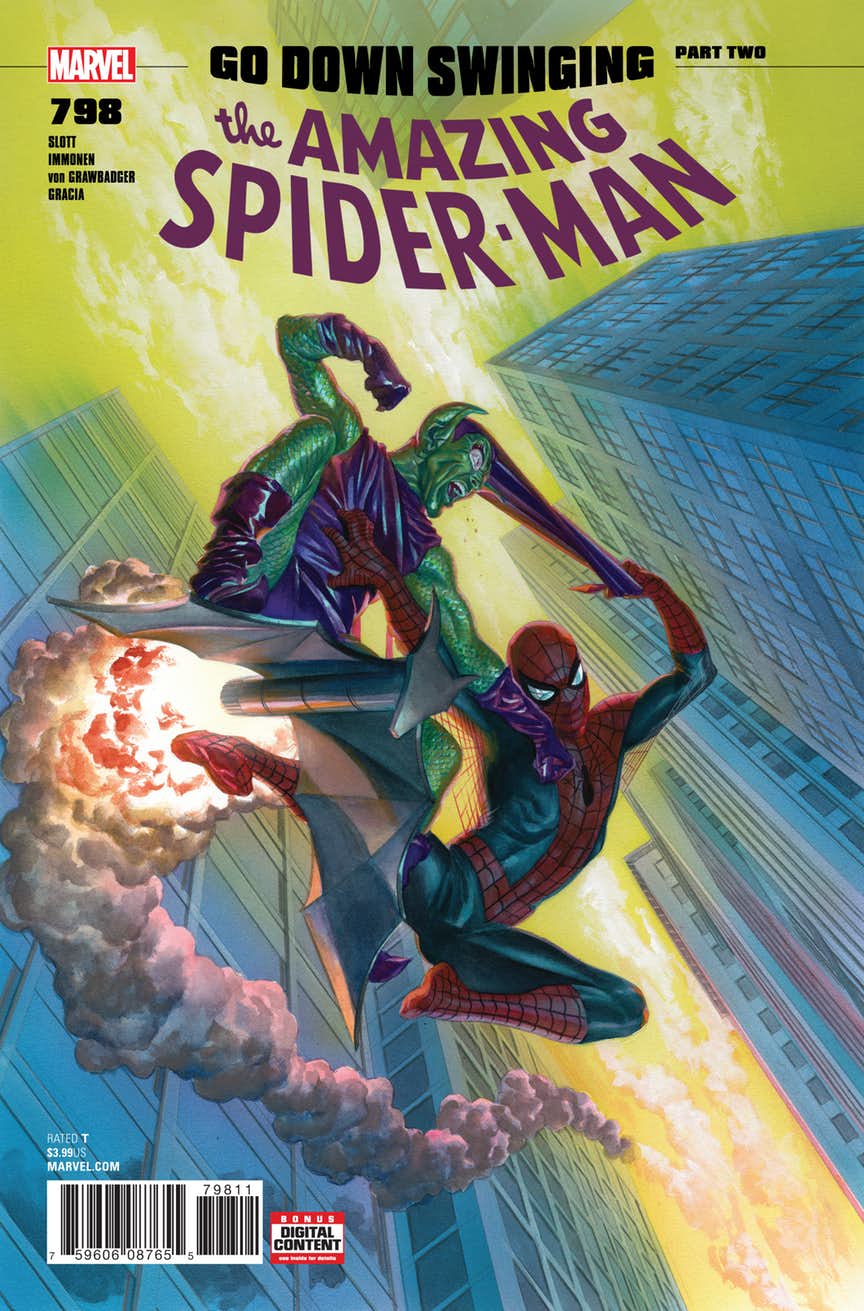 Last issue ended with a threat worthy of Dan Slott’s final story arc. This issue delivers on making that threat real. Norman Osborn now has the knowledge to change Spider-man’s life and his joining with the Carnage symbiote provides him the power to make those changes happen. This is the central focus of issue #798 and Slott slowly reveals the ramifications of Norman Osborn’s new knowledge and abilities. Slott gradually reveals the extent of the threat through a satisfyingly frantic battle that leaves both Peter and the reader little time to catch their breath.

The artistic team of Immonen, von Grawbadger, and Gracia do a masterful job of depicting the intensity of the confrontation. What starts as a traditional Goblin battle, with character poses and positions that evoke decades of similar web and glider fights, evolves into a threat that Spider-man is not prepared or capable of dealing with. Osborn’s attack does not set off Peter’s spider-sense and the pacing of the battle does not allow Peter time to reflect on why. Osborn’s old fashion pumpkin bombs have new abilities thanks to the symbiote and what should be the end of Norman Osborn is only the beginning of the symbiote infused Goblin.

Spider-man fans of any generation should be delighted with the imagery that echoes throughout this issue. History is used not as a crutch or a ploy, but as an effective visual means to demonstrate the true threat of this new Goblin. Immonen imagery of an impaled Goblin has clear allusions to Osborn’s first implement with his own glider. The difference here is the Carnage symbiote and Immonen and Slott hold that reveal for maximum impact. Slott allows Osborn to toy with Peter by pretending to be confessing on his deathbed, but the power and protection of the symbiote change the entire encounter. What would have been the end, is now only the prelude of a battle for the survival of Spider-man and everyone connected to Peter’s life.

Norman Osborn’s character has remained in an awkward and often irrelevant position since the end of the Dark Reign storyline almost a decade ago. It is fitting that Slott’s decade-long reign on this title draws to a close with the return of Osborn as an urgent threat to Peter Parker’s world.