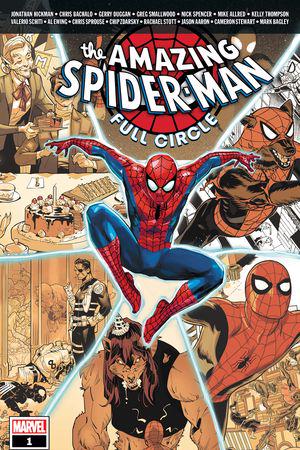 Full Circle is a comic book concept album, a successful concept album. Seven different teams each took on a chapter for this oversize Spider-man adventure without any prior scripting or storyboarding. Each creative team only knew the parts of the story that came before them and were left to pick up and create new threads along the way. Full Circle is a storytelling exercise that many English classrooms have attempted over the years - writing a story in the round. This high concept narrative results in a fun, globetrotting adventure that at its’ core stays true to the character.

The challenge of this concept is to create a story that flows and that carries enough threads to create a comprehensive narrative rather than a series of disjointed vignettes. Fortunately, the creative teams succeed in this challenge and create an overall narrative while leaning fully into the over-the-top scenarios that spitballing storytelling can create. The story starts in space, lands at an amusement park and makes its way to New York. Each chapter builds to a crescendo and leads to a cliff hanger creating the jumping-off point for the next writer. At first, these transitions are abrupt, but as the book continues they become natural points of excitement as the readers’ wonder what turn the next author will take. It is easy to envision the writers trying to one-up each other with crazier plot twists and challenges for the next writer to incorporate. This sense of fun permeates off the page.

For readers interested in this storytelling concept, the oversize book includes messages back and forth between the authors as they try to wrap up the story threads. It is an insightful look into the creative process of some talent comic writers.

While the writing fits naturally with this storytelling in the round, the artwork occasionally suffers from transition. The changes in style signal the change in author and fit well with the overall tone that the author brings to the story. The washed out colors in the opening chapter make some of the action difficult to track, but the reader quickly discovers the specifics of the action are not the focus of this creative endeavor. Additionally, there are times when the consistency of character depictions shifts between chapters, like when the effects on Peter’s physical condition seem to revert to an earlier part in the story. The inconsistency in art is ultimately used as a narrative hook for one plot thread and plays into the story improvisation the creators take.

In the midst of the escalating action, each author layers truths to who Peter’s character is so that by the end of the book Full Circle becomes a new classic Spider-man story well worth the cover price. The creators successfully capture the classic struggle of power and responsibility in a refreshing high concept, yet heart felt book.