The Batman Who Laughs #2 REVIEW 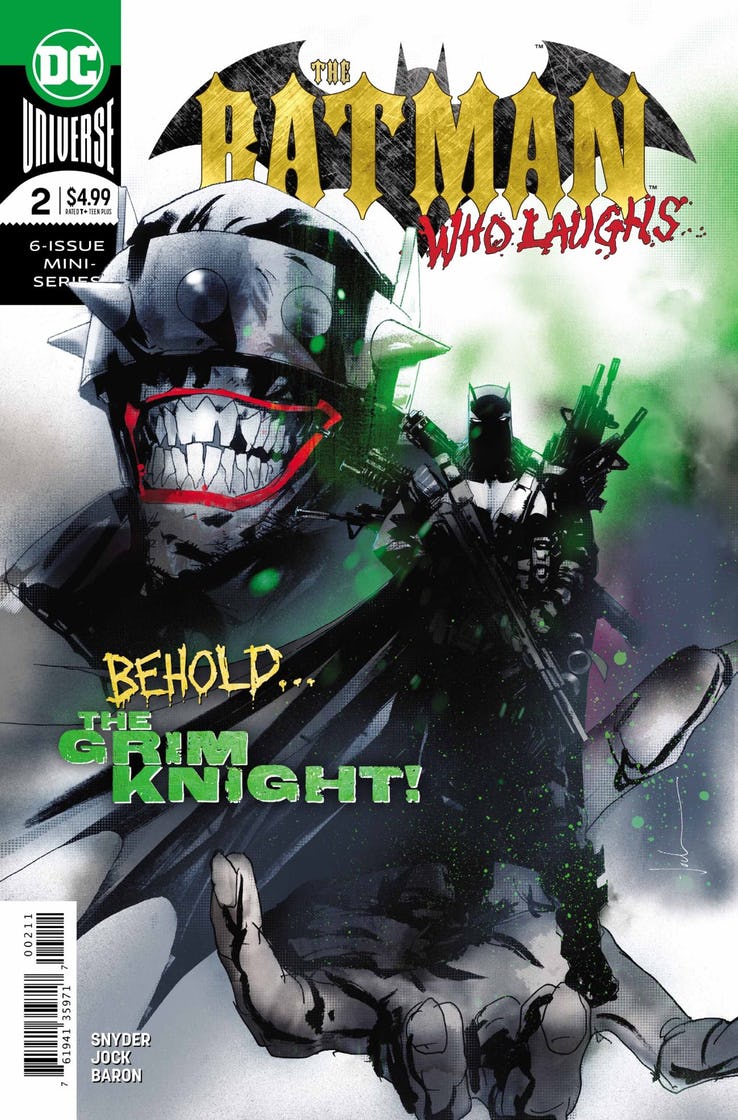 The Batman Who Laughs #2
DC Comics

Both Jock’s main cover and Ben Oliver’s variant cover for The Batman Who Laughs #2 are absolute gems, in their own way. Jock’s highlights The Batman Who Laughs’ right hand, The Grim Knight. First off, great name. Second, Batman with guns. Somehow, Scott Snyder has developed another character that could very well warrant a mini-series of his own, solely based on the fact he looks awesome and is Batman. (Maybe that one could be in The Grim Knight’s reality?) Oliver’s cover is a bit different from Jock’s. Simply put, it’s the thing you have nightmares about as a kid.

Speaking of bad dreams, The Batman Who Laughs apparently has a nickname for this reality’s Batman: The Nightmare Batman. (Not quite as cool as The Grim Knight.) It’s not because this Bruce Wayne more terrifying. He’s his own nightmare because he’s never happy. It makes sense, in a way, but this is still another villain toying with Batman’s psyche while he’s weak.

Keep in mind, Batman’s not only fighting a sinister version of himself and The Grim Knight, he’s also inhaled The Joker’s toxin. It’s to the point where he’s walked around with more needles in him than Bane. Even then it’s not enough. He’s flipping out on Alfred, he lost it on a police cadet while disguised—he evened threatened The Batman Who Laughs’ life. Certainly, it’d be ideal if the Batman-Joker mix was offed once and for all, but for Bruce to make that threat, well, it warranted a triple-take while reading.

Batman always finds his way out, but much like in Dark Nights: Metal, beating The Batman Who Laughs feels impossible. He’s Batman’s brain and relentlessness mixed with The Joker’s chaos and evil. How do you stop that twice in a lifetime?