The Batman Who Laughs #7 (REVIEW) 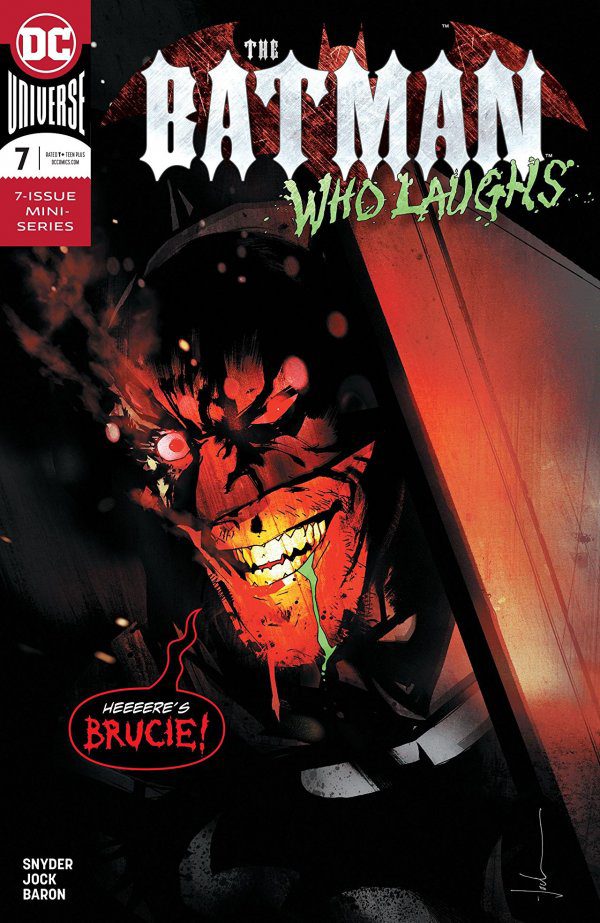 The Batman Who Laughs #7
DC Comics

(Contains spoilers for The Batman Who Laughs #7.)

Endings are never easy, especially when they involve a brilliant villain like The Batman Who Laughs. Batman’s new rival has been built up to the point where he seems nearly unbeatable for one of the greatest minds in all of literature, not just DC Comics. The evil Bruce Wayne was just too damn smart. Batman without a leash.

Scott Snyder put himself in quite the difficult spot in The Batman Who Laughs #7, though he was able to give the storyline a solid ending. He didn’t hit it out of the park, but it was good.

The payoff itself — meaning how Batman stopped the transformation — was probably the worst part of the whole issue. Whether it’s Bruce’s explanation about Joker being helpful or Alfred stating Batman held on because, well, he remained Batman. Not exactly a shock.

However, the build-up for the big fight was outstanding. While it was easy to assume Batman would get out of the jam simply because he is who he is, Snyder found a way to tell a suspenseful story that keeps readers on the edge of their seat.

Best part in it all is perhaps the fact the Batman Who Laughs has been put away, not killed. He’s too impressive a character to wipe away so easily.

Lastly, looking at the bigger picture, the Batman Who Laughs’ presence is necessary in the DC Universe going forward. He’s the embodiment of everything evil that lives within a character that’s always been known for doing what needs to be done — with some level of restraint — for the greater good. As much as Joker and Batman have been the perfect foes forever, the Batman Who Laughs may be his best adversary yet.

The Batman Who Laughs is the perfect modern-day comic book addition. Although he’s not exactly a “brand new” character, he’s a new take on a beloved character and he pushes Batman to greater lengths to win than readers have ever seen.