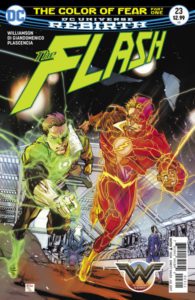 It’s Barry Allen’s birthday, but he can’t seem to find a reason to celebrate. After the events of “The Button” Barry finds himself still afraid of his fallen foe Reverse Flash. As he examines the villain’s dead body in the morgue, he is interrupted by two of his colleagues. Even as he is thrown a birthday party by Iris and attended by everyone he works with, nothing seems to lift his spirits. Even spending time with his father and the arrival of Hal Jordan bearing gifts isn’t enough to break him out of his shell. As Iris attempts to confront Barry about his mood, a supervillain arrives looking for one of Barry’s co-workers.

Reeling from disturbing visions of Reverse Flash killing everyone he loves and his run-in with Jay Garrick fresh on his mind, Barry is snapped out of his daydream just in time to suit up and join the fight. There is a really good moment in the story where the tension between Barry and Wally is still present. Wally still feels betrayed by finding out Barry’s secret and the fact that he refuses to tell Iris just makes it worse. As the villain Multiplex attacks, Wally zooms away with Iris in an attempt to keep her safe. Barry and Hal take on the villain and his multiples as Wally and Iris are confronted in their home with an unwelcome visitor. 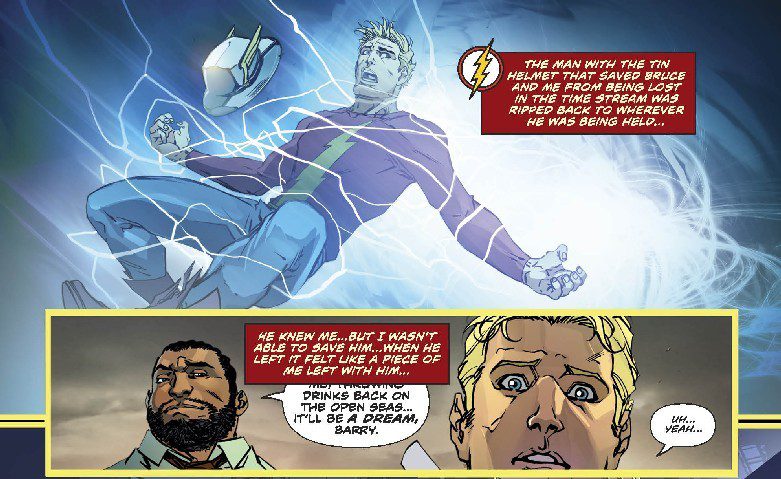 Williamson has really proven himself as someone who can setup and hold the tension of this story. Thawne has been depicted as being uniquely sadistic as well as powerful and using him as a villain has always made for interesting drama. It’s interesting to spend a few moments in Barry’s fear of Thawne and what he’s capable of. Thawne’s motivations have always seemed focused on Barry himself and that one on one dynamic really works well. The artwork by Di Giandomenico is dynamic and frenetic. It moves in ways that I really enjoy and there are some really awesome action shots with Hal and Barry.