Barry’s Force Quest is going to take him on a journey into fear.

The battle in Corto Maltese continues to rage as Cauldron uses a weapon infused with the sage force to create living nightmares to kill the two heroes.

Iris tries to keep everyone safe, but Cauldron tells Fuerza that he is going after family next. A move that fills the strength force user with a level of rage that even Barry can’t help to calm. As the two heroes fight off the creatures, their strategy makes Cauldron vulnerable. As he finds himself at the mercy of Fuerza, Flash must convince the new hero that killing the man is not the solution.

As Gemini continues their quest to get Barry’s powers, they find themselves in the country of Zandia. A haven for supervillains looking for a place to get away from the world, a group of villains finds themselves at the mercy of a new player in the city. A player who is using the sage force to get violent retribution on supervillains. When Iris and Barry arrive in the city in disguise, Barry’s introduction to the man called Psyche has an unexpected result.

I like the direction this story is taking. Williamson is introducing a different kind of character in Psyche and it looks like he will challenge Barry’s perception of heroism the same way Fuerza has. The Commander Cold investigation is also interesting and I like how it is starting to connect more to Barry’s force quest. One part of the story that could be a little stronger would be the point of the quest. I haven’t really seen Barry learn much and the fact that he seems to keep moving on with nothing resolved is an issue.

The art by Christian Duce is great. There are some amazingly detailed panels full of action and power. The tone of the story is reflected well in the art and the colors are really vibrant and alive, especially when the action moves to Zandia. 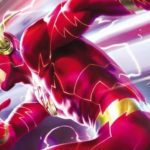