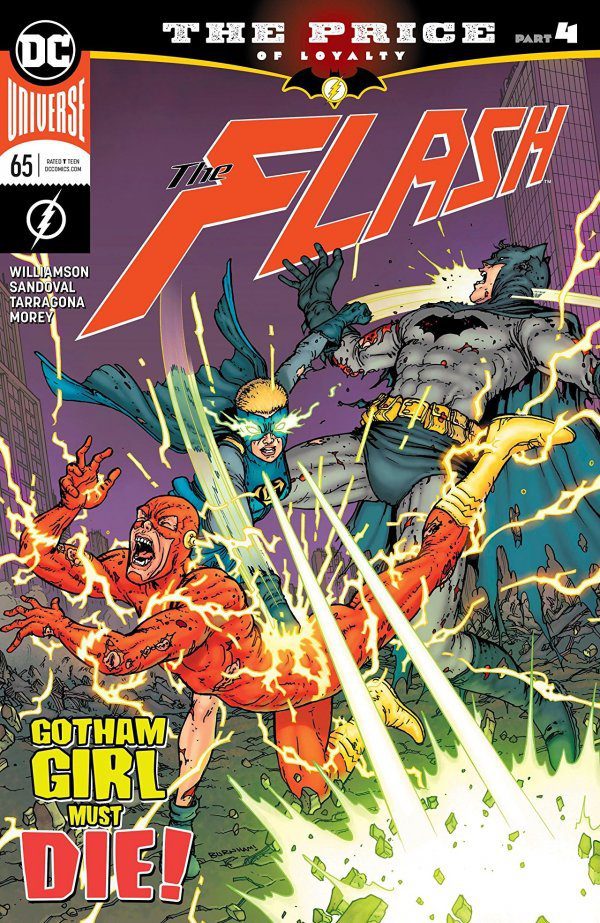 The trauma of Sanctuary continues to haunt the steps of both Batman and Flash in this issue.

Both heroes try to clear the civilians from the area as Gotham Girl continues to push her powers and taunt the heroes for their failures.

Batman tries to reason with her and when the compound augmenting her powers starts accelerating her death, she collapses.

Batman and Flash proceed to fight for her life and Iris intervenes to let the heroes know exactly what she thinks of their efforts. Sanctuary continues to push the heroes to work harder to help the dying Gotham Girl.

In the aftermath, Bruce and Barry confront each other in the Batcave. It’s a confrontation that will test the limits of their friendship in ways they never have before as both of them choose to hurt each other with the choices they’ve made for others.

In the stunning conclusion, Batman meets with another hero to discuss changes in their friends that might be connected to something bigger.

As fast as Joshua Williamson moved this conclusion along, he injected it with a lot of emotion in the dynamic between Barry and Bruce. The tension that has been building between the two of them throughout this crossover and Williamson handles it masterfully. The story that comes after this one looks to be another amazing one as Batman begins investigating his teammates.

Rafa Sandoval’s art is energetic, detailed and amazing. There are so many dramatic and beautiful panels throughout with the standouts being the fight to save Gotham Girl and the final confrontation between Barry and Bruce.