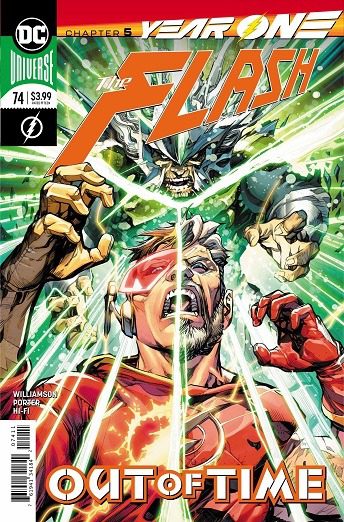 Barry might need to do the one thing he never thought he could do if he’s going to stop the Turtle and the future he fears.

Turtle has come from the future with old Barry in chains. Using old Flash’s speed, Turtle begins to enslave the people of Central City and Iris runs to Iron Heights to talk to young Turtle. Barry doesn’t know what to do, but he’s going to take a huge risk to free his older self.

After escaping from Turtle and his forces, both Barry and his older self take time to regroup and catch up. When older Barry asks about Iris, talking about the woman they both love inspires his younger self to take a stand. But will it be too late for Barry, Iris and the multiverse itself?

Joshua Williamson does a great job of continuing this unique take on the early days of the Flash. The storytelling is fast and deliberate and the pace of it gives immediacy to the plot and the action. Parts of this story have been hit or miss, but this issue pulls all the dangling threads of this arc together and creates an interesting roadmap for the story to travel.

Howard Porter’s art is fantastic. The characters look great and the art has some beautiful features that showcase speed and movement.