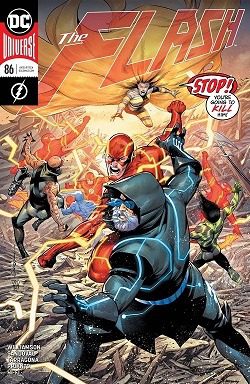 It’s the final confrontation between Captain Cold and The Flash with Central City hanging in the balance.

Leonard Snart has reached the peak of his powers thanks to the gift from Lex Luthor and he is determined to finally beat Flash once and for all. All he needs to do is unleash his new absolute zero technology on the scarlet speedster, but Flash has rediscovered a connection to the Speed Force and will not make it easy.

With the rest of the Rogues frozen solid and Cold on a rampage, Flash uses the Speed Force to get the one thing Snart forgot about when he decided to flex his new powers; backup.

With the Rogues and Flash working together, Avery and Wallace manage to find Iris and make it their mission to convince Mirror Master to end his alliance with Cold if there is any way to save the city. They’ll have to move quickly as well because the connection Barry has with the speed force is getting more unpredictable and causing him to lose control.

This is a mostly satisfying ending to the Rogues storyline. Williamson adds some entertaining flare to the story and the dialogue is well done. The final battle between Barry and Cold was brilliantly done and had some interesting and entertaining surprises. The story does a great job of not making this an easy victory for the Flash, but the ending felt a little derivative of another recent storyline.

Sandoval delivers some stunning art throughout this issue. The art had a fluid look like everything was in motion. Rafa Sandoval always gives the Flash a sense of energy when he’s drawing him and that energy is present throughout the issue. A great looking finale.