There is something I’ve always enjoyed about “gangster” films. Obviously the range of them can be quite broad from dramatic to comedic to downright outlandish, but the appeal is somehow always consistent. ‘The Gentlemen‘ by Guy Ritchie is certainly a gangster film but one with a joie de vivre that I’ve seldom seen in others. Matthew McConaughey plays Mickey Pearson who controls the marijuana trade throughout all of England. He decides he is ready to sell his business and retire with his wife Rosalind (played by Michelle Dockery). With a business as lucrative as his, there are a few interested parties who, naturally, feel Mickey’s $400 million asking price may be a bit steep. The dominoes start to fall as a gambit to drive down Mickey’s asking price spirals out of control coupled with an attempt to discredit Mickey by disgruntled newspaper editor Big Dave (played by Eddie Marsan). We see most of the film as told by Fletcher (Hugh Grant), a sleazy P.I. hired by Big Dave, to Mickey’s right-hand man Ray (Charlie Hunnam) as Fletcher attempts to extort Ray for $20 million instead of turning over all of the vital information he has gathered on Mickey and his operation to Big Dave.

This movie was an absolute blast. The cast seems to be having as much fun as the audience throughout the jaunty 1 hr 53 min run time. There is action a-plenty, intrigue, and just the right amount of comedic moments to keep the film perfectly paced. The entire cast was stellar from Matthew McConaughey’s normal smooth, commanding grace to Michelle Dockery’s street-wise purposefulness to Henry Golding‘s seething ambition. I will also say that this may be my very favorite performance yet for Colin Farrell who was effortlessly perfect in his role of Coach. Hugh Grant is also charmingly wretched as the double-crossing, only out for himself Fletcher. Not a single performance was lacking whether the characters were onscreen for the whole film or for only 3 minutes. Guy Ritchie is to be praised for his masterful handling of this entire project which is truly a return to form for this writer / director. While there is a lot of violence in the film (it IS a gangster story, after all), it never felt like violence for the pure sake of violence.  ‘The Gentleman’ is sheer, unbridled fun. Make sure you get out and see it this weekend at a theater near you! 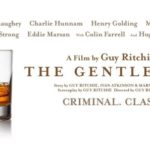 Color Out of Space (Review)