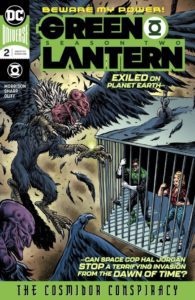 (WARNING: Spoilers for The Green Lantern Season Two #2 ahead.)

The idea of a “guano plague” came up in The Green Lantern Season Two #2. Not sure what that would look like. Can’t imagine it would be pleasant.

But if Liam Sharp were forced to draw it, it’s guaranteed you’d have to pause and examine every detail of the afflicted individual. He’s been in the game for so long, but his work still drops jaws. What impresses me most is how revolting his Ornithoids are, while Hal Jordan and Eve look like the ideal human beings at all times. It’s quite the juxtaposition.

And Sharp’s powerful artwork is necessary with a writer like Grant Morrison. There’s a lot of detail to the dialogue The Green Lantern Season Two #2, and by no means is it a quick read, but the back-and-forth between Jordan and whoever else he’s conversing with is so fluid.

And Jordan’s one-liners are on-point under Morrison’s watch. He’s a guaranteed good read, whatever story he’s in control of.

Definitely a story any Hal Jordan fan should get in on if they haven’t already.