The Hitman’s Bodyguard shoots into theaters this weekend starring Ryan Reynolds, Samuel L. Jackson, Elodie Yung, Gary Oldman and Salma Hayek. If those names alone aren’t enough to pique your interest, then perhaps my review may persuade you further. The best way to describe this film is to say it’s like The Odd Couple meets Lethal Weapon. Reynolds plays Michael Bryce, a triple-A rated personal security operative who is at the top of his game until he loses a high-value client. Fast forward 2 years and Bryce is on his own, providing security for drug-addled attorneys. Samuel L. Jackson plays Darius Kincaid, a professional & experienced hitman, who has been offered a deal by Interpol: testify against Belarus’s feared dictator Vladislov Dukhovich (impeccably played by Gary Oldman) and his imprisoned wife, Sonia Kincaid (delightfully portrayed by Salma Hayek) will go free. After accepting the deal, Interpol begins the transfer of Darius Kincaid to the International Court Of Justice hearings in Amsterdam under the watchful eye of Agent Amelia Roussel (Elodie Yung).  Before they can make it out of London, the transfer caravan is hit by agents of Dukhovich who will stop at nothing to keep Kincaid from testifying. With no choice left, Roussel calls in ex-boyfriend Bryce to ensure that Kincaid makes it to Amsterdam in time for the hearing. If Kincaid doesn’t appear in court to testify, Dukhovich will go free.

The film is laced with the typical Ryan Reynolds‘ humor and Samuel L. Jackson‘s signature swearing. There is also a LOT of violence, but then again, the title IS “The Hitman’s Bodyguard” so one SHOULD expect quite a bit of the rough stuff. Action is the order of the day and both Reynolds and Jackson are easily up for the task. Their chemistry on-screen is fantastic and all of the supporting cast are also superb in their roles. (Honestly: When has Gary Oldman ever NOT been superb?) The plot itself is not particularly inventive and the story is rather predictable, but it moves along at such a great pace from the beginning that you never really have a chance to stop and think about this flaw until after the film is over. The fight choreography and stunt work throughout the movie are also exceptional and I think this is a project that should afford a great deal of pride to all of those involved with the entire production. For best action flick of the year, I’d say that this one comes in right behind Atomic Blonde for me as the most fun offering of the summer.

Have you seen this:
Free Guy (Review)

The Hitman’s Bodyguard is a solid film and only loses a few point the aforementioned predictability. If you get the chance to see a film this weekend, I would certainly recommend checking this one out. If for no other reason than this: You get to see Elektra hire Deadpool to keep Sirius Black from killing Mace Windu. Now THAT’S entertainment!! 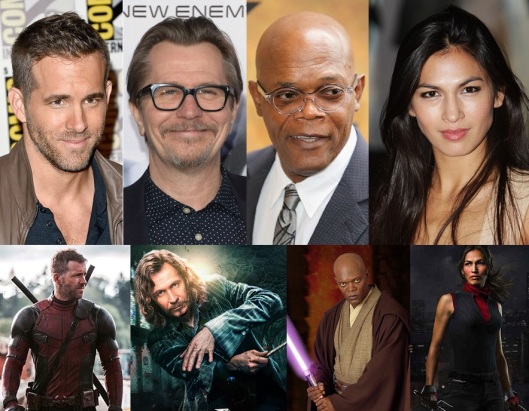