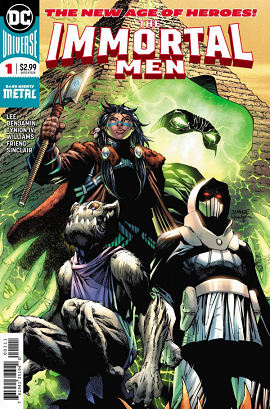 A young boy named Caden is struggling to live with constant dreams of him visiting refuge for superhumans. The Immortal Men must recruit the boy before a rival group of powered immortals kills him.

This first issue is the Stranger Things of comic books. But instead of 80’s horror, it’s 90’s action comics, even down to the artwork. The concept reminds me of a cross between the X-Men and the film Highlander. You have a group of immortals killing each other and taking the essence of their fallen victims, but the groups are split up like mutants. The good guys even have a refuge called The Campus where they teach students to use their powers. Caden’s power of seeing glimpses of a person’s past when he touches them is pretty interesting. The art was great too. I believe Ryan Benjamin did most of the pencils, though I’m not positive. His style is reminiscent of John Romita Jr. compared to the style of the creator of this series, Jim Lee. The issue throws a lot of familiar story beats at you, which could have turned out very redundant, but it was actually a fun read.

I am disappointed that we didn’t get a full issue of Jim Lee to launch a series that he basically came up with. Though he’s got some big projects coming up so it’s understandable that this isn’t his highest priority. Also, Benjamin is no slouch, there were some dynamic action scenes throughout. On one hand, I’m glad they focused on Caden and highlighted the struggle with his powers. It was quite endearing, and you are cheering for him by the end. On the other hand, there was little shown of the actual Immortal Men, and when they were shown it wasn’t really impressive. The ending was exciting though.

This was a solid launch of a new set of characters. Though I would have liked more of the immortals, we were introduced to a pretty cool concept, that actually has potential to become something more. Caden is a likable main character, and this series is filled with talent. Especially is writer James Tynion stays onboard for an extended period of time. Out of all the New Age of Heroes comics that have been released, this may be the most promising.