I’ll never forget playing the classic You Don’t Know Jack with my friends back in the 1990s. Sitting around a small PC, we listened as the world’s most sarcastic announcer presented questions ranging from pop culture to science and philosophy, and then we’d hurl our fingers at the keyboard to reflect our less than confident answers. Whether we were right or wrong, the game still found ways to make us laugh and forget about who the winner or loser was. Little did I know at the time that it was setting a new standard for how a multiplayer trivia game could be played.

All these years later, the the experience lives on in Jackbox Games’ Jackbox Party Pack 3, where up to eight players can compete against each other in five diverse games (Guesspionage, Trivia Murder Party, Tee K.O., Quiplash 2 and Fakin’ It).

To start, after launching the game on the console/PC, each player (host included) logs into the jackbox.tv website via their smartphone or tablet, chooses a user name, provides the four-character room code ID assigned by the game, and joins the round.

From there the experience unfolds much like a You Don’t Know Jack game. Greeted by the Jackbox host’s playful commentary, you and your friends answer trivia questions, face hilarious punishments for answering said questions incorrectly, draw pictures on your device, try to guess which player might be lying about themsleves (why is it so hard to lie to friends), and attempt to come up with shirt slogans that are more terrible or amusing in order to outscore your opponent.

Jackbox Party Pack 3 has come far from a few friends sharing a keyboard in a cramped space. Allowing everyone to bring their own controller to the game in their mobile or tablet device gives everybody plenty of space and creates a more relaxed vibe.

Although I never experienced any siginificant lag or technical errors with this method, there were rare moments when somebody would attempt to answer a question at the last minute and it didn’t transfer over to the actual game. But this never seemed to end anyone’s fun and that’s due to the consistency that is reflected throughout the majority of the game’s experience. 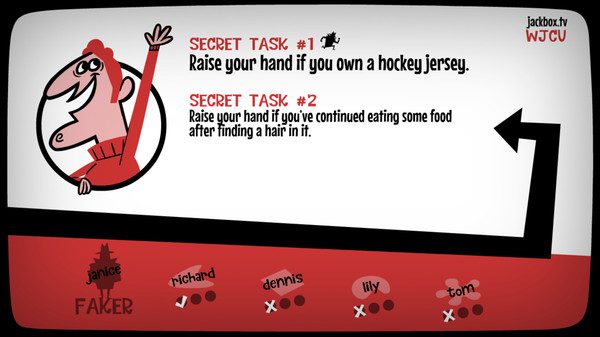 In Quiplash 2 you and up to 7 other players are given prompts and can respond in any way possible. The resulting humor reminded me moments experienced in Cards Against Humanity, and just like in that game, players choose which responses were funnier. When you’re with a group of friends, everybody’s being witty, and the inside jokes start coming out, its one of the included games sure to draw a bunch of laughs.

The other games themselves prove to be excellent fun, although Trivia Murder Party and Fakin’ It seemed to be the crowd favorites for their use of dark humor and having to straight up lie to the people that known you best. 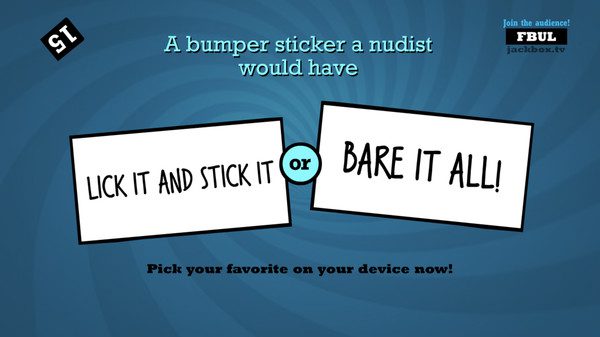 Murder Trivia Party does a great job of switching between group questions and one-on-one competition in the form ranging from memorization to even answering math problems. My wife and I actually preferred playing Guesspionage with just the two of us. The aim of that game is to guess the percentage of people’s responses to survey questions. However, according to one of the statistics it presents, apparently more people prefer Bugs Bunny to Mickey Mouse? We immediately shed a tear and said a prayer for all of those lost souls.

Fakin’ It is the game where you have to convince everyone else that you’re not lying about your answer to a question, proving close friends are the ultimate form of polygraph testing. Again, it was one of my favorites since I enjoy games where you are actually interacting with each other. 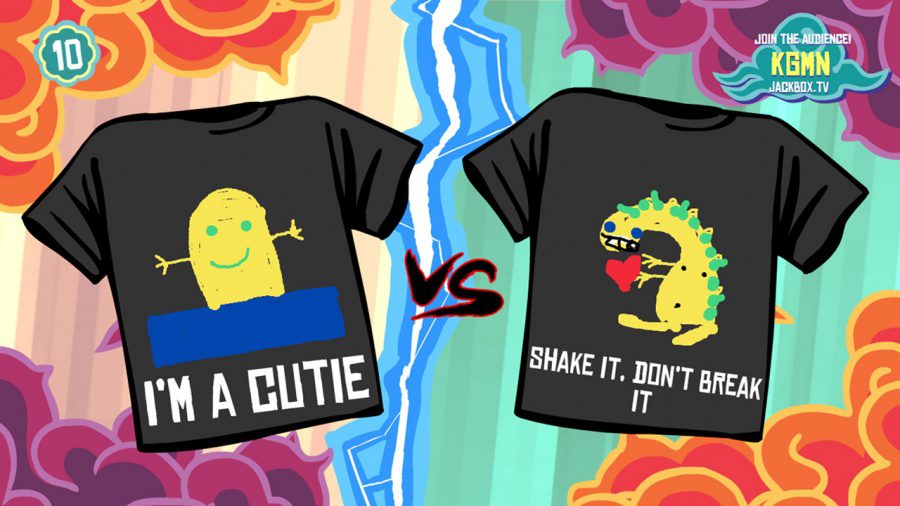 Tee K.O. was probably the least enjoyed game. The concept is great though. You and your friends have journeyed to mysterious T-Shirt Island where you must compete in an ancient fighting tournament. But instead of fighting with fists, you fight with t-shirts. Everybody draws pictures and writes slogans, then they get swapped around to other players. Whoever puts together the best/funniest/stupidest shirt wins the battle. Every group of friends is different and I’ve spoken to people who thought this was their favorite. So if it sounds appealing to you, you’ll probably like it.

Although this game is available on many different devices, I prefer the Switch version due to the system’s mobility and use of table top mode. Being able to play this in a break room with some co-workers proved to be a blast.

At a reasonable $25, The Jackbox Party Pack 3 is worth your consideration as a party game with a great deal of variety and fun to offer. If you feel in need of company and some good laughs, this title is the perfect excuse to make that happen.