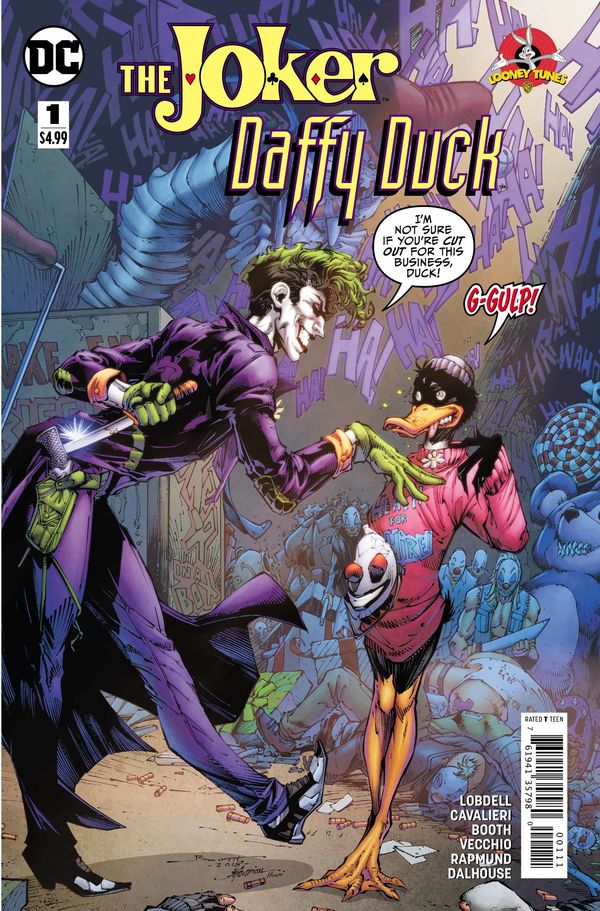 The world of Looney Tunes crashes into the world of DC Comics in a new series of one-off issues that feature one of the beloved characters engaging in an adventure with one of the costumed heroes of the DC Comics. This time, one of the tunes finds himself saddled to the worst of the worst when it comes to villains. This issue is broken up into two different stories.

The first story finds Batman on the hunt for the Joker after he killed a room full of people at a comedy club. At the same time, Daffy Duck is trying to contact the Acme Company regarding an issue with a defective product. When he gets no satisfaction over the phone, Daffy decides to go to the company headquarters in Gotham City. When Daffy witnesses Joker “disciplining” one of his henchmen, he is caught and must use every ounce of wit he has to convince the clown to not kill him. The pacing of the story is really good. It has the gritty feel of a Batman comic, but it makes good use of the comedy sensibilities of a Loony Tunes cartoon in the moments between Daffy and Joker. I liked the dynamic and though it was a clever pairing for these two characters. The art was amazing and really vibrant in its detail.

The second story finds Commissioner Gordon and Detective Bullock on the roof of the GCPD turning on the Bat-Signal to call in the greatest shrink they can find, Daffy Duck. After informing Daffy of a kidnapping by Joker’s goons, they tell him that they need him to find a way to get to the Joker in Arkham so that the hostage can be rescued. They also make it a point of pointing out the dumpster full of failed therapists that preceded him. Daffy and Joker are locked in his cell and begin their battle of who is the most insane as they go back and forth. Unfortunately for Daffy, Joker is hiding a secret that could pluck this duck for good.

This story was definitely the most cartoony of the pair. It had the look and feel of an episode of Batman: TAS and that made it work as a story. It wasn’t trying to break new ground with the characters and did a really good job of pushing the absurdity in their interactions. A really fun interlude in this issue.