THE LIFE, DEATH, AND LEGACY OF THE SEGA DREAMCAST

“It’s Thinking.” This 15-second advertisement played over and over again in 1999. The excitement was palpable in the days counting up the release of the Sega Dreamcast. It was beloved by fans and even named by fans! So what happened? Why is the Dreamcast not revered the same as the Nintendo 64 or Playstation 2?

Launched in Japan on November 27, 1998 and nearly nine months later in North America on September 9, 1999, the Dreamcast dropped at a price of $199. After launching in Japan with only 4 titles available, Sega spent the subsequent months between releases working diligently to beef up the line-up to 15 games. While the Japanese launch faltered with a bare bones selection of launch titles, the US launch fared much better. Popular titles included Sonic Adventure, Ready 2 Rumble Boxing, NFL 2K, Mortal Combat Gold, Virtua Fighter 3TB, and House of the Dead II, all of which helped bolster system sales in the US. 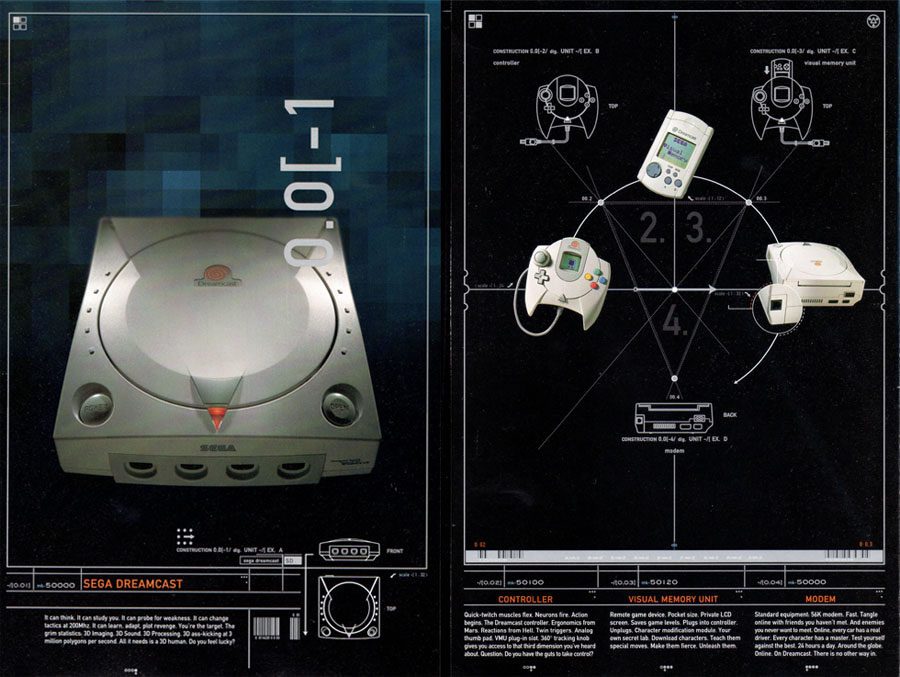 Sega set a new sales record by selling more than 225,132 Dreamcast units in 24 hours and within two weeks of launch it has sole nearly 500,000 units. This may seem paltry compared to the Wii’s sales (5.84 million units shipped in the first three months) but exceeded the Nintendo 64’s early numbers.

Still reeling from the failure of the Saturn, the developer tried a different approach by committing to low-cost hardware. In lieu of using hardware specific to video game consoles they opted to use hardware more common in personal computers. This enabled Sega to drastically reduce their overhead costs thus allowing them to launch well under the prices of the competition.

In contrast to the expensive hardware of the unsuccessful Sega Saturn, the Dreamcast was designed to reduce costs with “off-the-shelf” components. In a counterintuitive move, executives at Sega asked two separate teams to begin to develop a new console. One group, based in Japan, proceeded using the Hitachi SH-4 processor architecture and the Video Logic Power VR2 graphics processor manufactured by NEC. The other team, based in the US, opted to use 3dfx Voodoo 2 and Voodoo Banshee graphics processors alongside a Motorola PowerPC 603e CPU. Both

processors used inexpensive components but after some debate Sega ultimately decided to use the Japanese team’s design. This decision was primarily based on the company’s relationship with NEC, the manufacturer of the chip, and the processor’s ability to run the 3D geometry calculations needed for the better graphics.

A key area of interest at this time was the future of internet gaming and how it would play into the home console market. With this in mind, a modem was included with every Dreamcast. Despite staff complaints concerning the additional $15 cost per unit, the decision to add internet connectivity would prove somewhat fruitful with the fan base.

Within a year of its release, sales for the new console were already on a steady decline. To compete with a growing market Sega executives decided to double down on the modem and online services.  Near the console’s first birthday Sega launched SegaNet, the Dreamcast’s internet gaming service. Online services for games were increased and a number of great titles were supported. ChuChu Rocket!, NFL 2K, Bomberman Online, Quake II Arena, Unreal Tournament, and Phantasy Star Online all posted good sales and increased popularity for the system. At a subscription price of approximately $22 per month (nearly $30 in 2017 standards) this peripheral service breathed a little life into the system but not enough to fully resuscitate it. Even with this effort, the phenomenal popularity of the PlayStation 2 would end up being the stake in the heart of Sega’s final system.

With the March 2000 release of Sony’s landmark PlayStation 2 console, Sega got worried and began to grasp at straws in order to keep the Dreamcast alive. The initial price reduction and release of Namco’s hit Soul Calibur initially helped sales however this was all for naught as the price cut forced the console to be sold at a loss; the direct opposite of Sega’s initial vision involving cheaper hardware. Poor pricing practices and some lack of third party support slowed interest in the console as well. Eventually the price was dropped to $99 to eliminate its unsold inventory and (after a further reduction to $79) the Dreamcast was cleared out of stores at $49.95, basically the same price as a used one today.

After some significant financial losses, Sega discontinued the Dreamcast on March 31, 2001. This decision ultimately led to Sega leaving the home console market and becoming a third-party publisher. Third party transition was made possible by Isao Okawa, Chairman of Sega Enterprises, forgiving all of his loans and donating his SEGA stock prior to his death.

As I mentioned before, there is merit to Sony flexing its technological muscle (and the use of the movies on discs!) and dominating the market however a good portion of the blame falls on the poor business practices of Sega. Previous hardware iterations like the Sega CD, the 32X, and the Saturn made consumers nervous about the longevity of their products. This is a huge issue with technology companies as they often have to ignore or explain away decisions that left the public spending money with no reward (I’m looking at you Apple Watch).

In the years since the Dreamcast was put to rest it has fortunately maintained a legacy amongst collectors, developers, and home brew connoisseurs. From a collecting standpoint the games are a rarity and are often high priced because of their rarity. While copies of Shenmue, Street Fighter, and Skies of Arcadia can cost anywhere from $40-80, the console itself has actually become quite abundant and inexpensive. Every retro game store is littered with $40 yellowed systems and buying VMUs is easy (heck, you can still get them new on Amazon).

The real legacy for the system is defined by the developers that continue to explore the technology. Even before its death, gamers figured out how to exploit security holes allowing the Dreamcast to play burned games from a CD-R. With this revelation, many game designers realized there are no licensing fees to pay, games can run region-free, and pirated games self-bootable. This is arguably the main reason the Dreamcast homebrew scene has flourished.

As recent as 2015, many publishers have continued to make. GOAT Store Publishing, Hucast Games, and NG.DEV.TEAM are amongst those that carry the torch and they all not only create new games but revive dead franchises and port non-Sega games to the console. Microsoft even developed a custom Dreamcast version of Windows CE with DirectX API and dynamic-link libraries, making it easy to port PC games to the platform. Dreamcast Scene, a still active community site, counts over 15 games as released as of 2017, making development nearly as active as the years since SEGA shut down operations.

Although these illegal measures are often maligned by the collecting community, I love that modern gamers are able to easily enjoy the hard work that otherwise would be buried with the console. The enjoyment of the games is the pillar of the console’s importance and luckily there are an admirable few that make the titles accessible, not for financial gain, but to share their love of the art.

For those that do not have a Dreamcast, I highly recommend adding one to your collection. It may not hold the prestige of the N64, the library of the PS2, or the power of the XBOX but the quality of the product combined with the sheer satisfaction of playing some great games should be enough to give it a place in the console pantheon.

Want more information on the Dreamcast? Be sure to check out GWW’s 7 Fun Games for the Sega Dreamcast and GWW’s Streaming events.