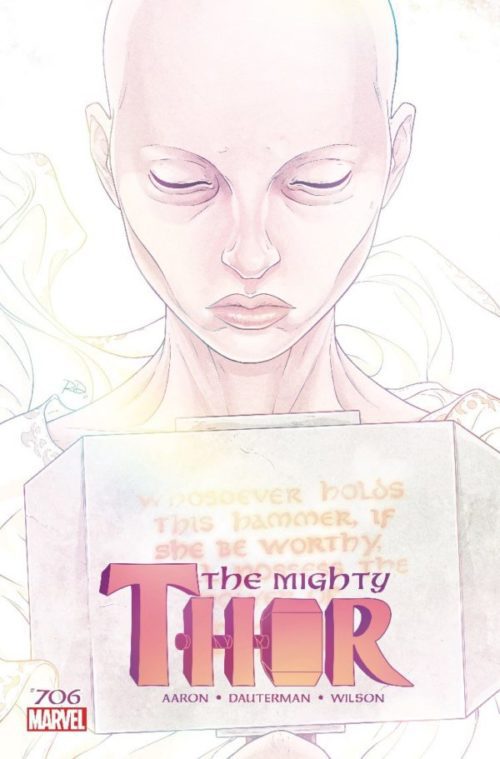 Um, apparently submitting the crying emoji and a link to some sad nu-electro doesn’t count as a review of The Mighty Thor…so, here it goes.

It’s an ending..and it’s a good one. A just one. I won’t say anything else, obviously, but it’s at least partly fitting. It came to a natural end, one that a lot of writers and artists don’t get most of the time. Of course, it’s but one part, The Empire Strikes Back if you will, of Jason Aaron’s overall Thor story—which still is not done. It’s difficult to accept that this will be the last we see of Jane Thor, at least for now, but it’s good to know no small part of her will live on. Looking back on it, there were clues to this ending sprinkled throughout this saga, since Jane was reintroduced back in Lords of Midgard, that it was going this way. Hats off to Aaron and co., though: they did warn us it wasn’t going the way we thought and…they were right.

Have you seen this:
Batman ‘89 and Superman ‘78 movie worlds turning into comic books

I still don’t fully know how I feel about it; some of my frustration still stands, but I think I can live with it. Perhaps it’s the price we pay in an atmosphere where female heroes have to tread lightly and “not overstay their welcome.” It’s a sentiment that annoys the ever living piss out of me, frankly, but again—if my main criticism was that I wanted more, that’s a pretty good criticism to give. Again, the door seems to be open for a little more in the future. We’ll see. Though if any mancan write Jane Foster better than Jason Aaron, I’d be surprised. (If they can’t find one, Marvel can call me. Obviously.)

Art-wise, while #705 was a showcase of Russel Dauterman at his most epic, most bloodthirsty, this is him at his most gorgeous, most haunting, and most beautiful—that’s what this is—from shots of Valhalla, to old Asgard, even a scene of hard denial on the moon and that ending! It’s all a work of art and reading the end letter from Dauterman, you can tell he poured so much love into every panel he contributed.

You know something that I don’t see getting enough praise that really deserves it? The lettering. Every krakkooom that’s seamlessly incorporated into the art, ribbons of lightning forming the words, is just perfect. One scene, in particular, is poignant and kind of adorable, in at least a small way.

Listen, if you can get through this without weeping, profusely, then you’re made of sterner stuff than me. I will need time to process this. I feel deeply sad but ultimately hopeful. I think you will too, and I bet you any amount of money in the world that this run will be heralded as a triumph…because in my humble opinion, it is. And then some.

Jason Aaron Marvel Comics Thor
Are you an Insider?News, reviews, & updates are just the beginning.