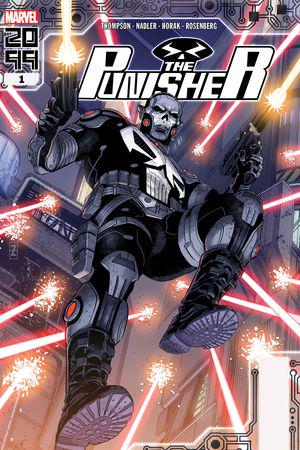 It’s the year 2099 and a cult of thunder god worshippers called Thorites threaten law and order in the city. Lt. Hector Tago is a member of the Public Eye, the local police force and finds himself embroiled in an officer-involved shooting.

After investigating on his own, Hector discovers that everything is what it seems. The tech that feeds his memories and the social media score everyone lives under is tainted and Hector’s investigation will show that there is a corruption in the system that he never saw before. A corruption that will cause him to take action against those responsible.

I really wanted to like this issue. As a fan of the Punisher and what the characters legacy as an anti-hero means, I was expecting something interesting to read, but this story is flat, boring and tedious. As an indictment of social media culture, police brutality and social decay it’s lacking any interesting commentary on any of them. The characters are one dimensional and unremarkable. The plot makes little sense and wastes everything that could have made it good. I couldn’t connect with Hector Tago at all. He had no personality and there was nothing in this issue that would lead anyone to believe that he could be the Punisher, let alone no compelling moment that showed his transformation. He’s completely unremarkable as a character.

Matt Horak and Eoin Marron’s art is as flat as the plot. The Thorite scenes are well done, but everything else is just boring which is more reflective of the plot than the artists.