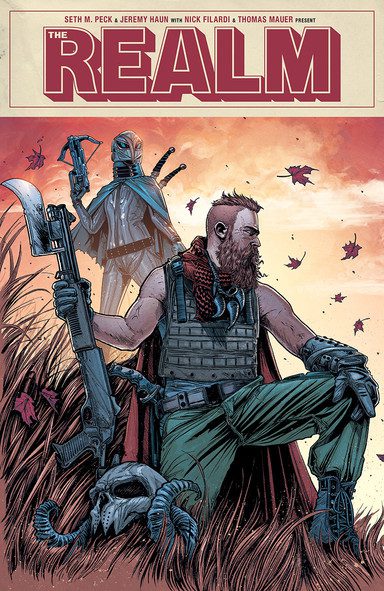 Additions: This trade includes a cover gallery of the issues contained in this trade.

This is the second installment of Peck and Haun’s modern-day fantasy hybrid. Imagine if fantasy literature staples like trolls, Dragons, swords, and sorcery met the modern world full of bullets, bombs, skyscrapers, and smartphones. This series is like reading about the cast from the Walking Dead trying to survive in a Game of Thrones style world without all the zombies… at least we haven’t seen any zombie hordes…yet.

The greatest strength of this series is the wide open options of storytelling that are available to the creators. The possibilities are endless. The moment that the action begins to die down—Boom! Here is a death cult full of weird Jawa-like creatures led by a dark wizard spider creature. Yeah, you read that right. The second that you start to find your footing inside the bizarre world that Haun and Peck have created, the landscape shifts as a new angle is introduced. In most comics, these shifts would be jarring, but here they are welcomed and expected as we are trying to understand this world alongside the main characters.

The blend of magic and modern is the perfect combination for what this series has set out to accomplish. In this second volume, we get an action-packed adventure featuring most, if not all of the cast. Rook (who is my personal favorite) and Ben are on a tracking mission that goes sideways when they run headlong into a group of meth-fueled hillbillies. Meanwhile, the rest of the group is busy trying to save Will from the clutches of the aforementioned death cult… well… they’re not really a death cult, but more of a blood cult. (Question mark) In any event, Will is on the menu for their next sacrifice.

For those of you who have followed this series from its inception, you have looked on as the creative team has continued to flesh out this strange new world. This volume introduces a new god-like antagonist appropriately named the Red Mother. It’s expansions to the universe like these that leave the series open to wild plot twists and turns, but the series hasn’t hit that point of cheap surprises for the sake of shock value. The Realm is still fresh and new and shows no signs of slowing down. This graphic novel and its precursor are the perfect gifts for that picky fan in your life. There is something here for everyone to love.