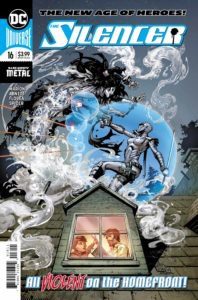 Last issue (The Silencer #15) introduced readers to Honor Guest’s “sister” Smoke, a kick-ass metahuman made in a bottle. She showed a ton of potential, both with her desperation and her abilities. She even killed off her “brother” Raze — who needs to return at some point because he’s pretty awesome himself.

In The Silencer #16, Dan Abnett and company continue to give Smoke a more prominent role opposite Silencer. Only, she’s not exactly a villain. Smoke is looking for a shot at living. Can you really blame someone for that? But referring to her as an anti-hero at this stage might be a stretch, but there’s potential.

Abnett could easily lead her down that road. Actually, it seems that’s where she may go, given she has forced Honor’s hand. Thanks to Smoke, Talia al Ghul knows Silencer hasn’t been brainwashed. Quietus can say Talia is “suspicious” or whatever, but she’s too smart for that.

This puts Honor in a bind. It appears she wants to help her “sister,” but prior to being exposed, Silencer was working to kill her. That was only to keep her family safe — which is why she does pretty much everything she does at this stage. But now they’re not safe. Not safe from Smoke, not safe from Talia, not safe from anybody. That means it’s time to come home.

Silencer will find a way to keep her husband and son safe, there’s little doubt about that. The real question is, will she tell Blake she’s alive and give him an idea of who she really is?

The Silencer #16 keeps up the fast-paced nature of the title. The action is non-stop. Explosive car chases, ridiculous superhero-like entrances and the lot. What stands out most in it all is Silencer and Smoke’s hand-to-hand fight. Silencer has found a way to stop Smoke from phasing in and out. Now, Silencer doesn’t seem interested in killing her “sister” at this point, but we hadn’t seen Smoke fight without her powers. If Silencer was set to kill, she probably wins the fight. But we had no idea Smoke could get after it like this.

Hopefully, we get a team-up once this whole issue with Honor’s family gets sorted out. That way, the lovely “sisters” can torch Talia and her beloved band of degenerates.