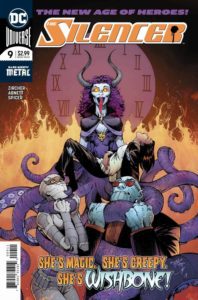 I honestly think 75 percent of The Silencer #9 is The Silencer and Quietus, one of the Leviathan underbosses, fighting. Only, the Silencer’s mind or soul or consciousness (whatever, you get it) is in Quietus’s “body-mod combat form,” and vice versa. It’s like a Freaky Friday situation, which is my one knock in this issue, but it’s pretty significant.

The character The Silencer (a.k.a Honor Guest) is still a relatively new DC character. We’re all just getting to know her. So I don’t need her swapping bodies with a villain who I’ve never heard of. Now, if she did that with a Wonder Woman or a Nightwing-type, just someone we know, then that might make more sense. The only recurring character within the series where something like this might be interesting is Talia al Ghul. Otherwise, what are we doing? (I understand the significance in the larger story, but I don’t love the decision.)

Legitimately, the only thing that came from the body swap that was worthwhile was The Silencer complaining during her inner monologue about being in Quietus’s body.

“Now I’m this 400-pound body-mod combat form who looks like he’s about to explain the Matrix to somebody.”

Have to respect a good Morpheus reference.

Now, Dan Abnett did this to force Quietus and The Silencer to work together against Talia, and it ties in Wishbone, another underboss, and head of Leviathan’s magic division.

So I understand how this makes sense for the greater purpose of the ongoing story, but I’m still not a fan of the move. It might be the quickest way to team these two up, and certainly ensures they’ll both be invested in one another’s well-being, but for the sake of the reader developing a relationship with The Silencer, I really don’t like it. As much as she’s still doing her inner monologues, I still feel like I’m reading Quietus’ thoughts.

Have you seen this:
Nocterra #6 (REVIEW)

The body-swap is a major part of The Silencer #9, so it has a pretty significant impact on this issue’s score, but that’s really the only thing bringing it down. Because outside of that I had really no issues with The Silencer #9.

As I said, a lot of action, and it was all good, too. Someone else within Leviathan gets axed; I really like how that went down. And I expect the start of The Silencer #10 will be pretty damn good.

Hopefully, they put Quietus and Honor back in their own bodies ASAP.