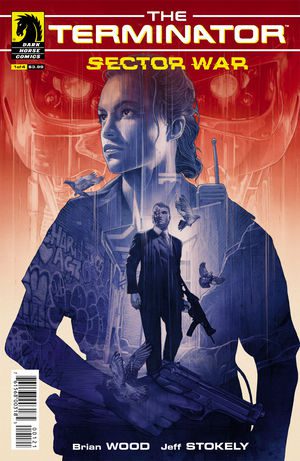 The time is Summer 1984 and the place is New York City. A Terminator has been sent from the future to take out a rookie cop named Castro. This is the start of a 4 issue series released from Dark Horse Comics and writer Brian Wood (Aliens: Defiance, Sword Daughter). It starts very similarly to every Terminator theatrical version that’s out there but then we get a little more as the issue continues.

This Terminator seems to be hell-bent on removing Castro from the picture and there’s another casualty it took out in the process. This unit is working separately from the one searching out Sarah Conner but with a similar purpose. The issue’s story keeps to a very regular pace that feels movie-esque in its approach. There isn’t anything majorly shocking nor exciting though with a four-issue run the impact could be in the next one.

The artwork and colors are very raw and subdued compared to the four colors of many other works. The details when it comes to the backgrounds pulls you into 1980s NYC. Readers will feel like they’re on the hunt with the T-800. A decent start to the run, looking forward to seeing what Issue #2 will bring for Castro.