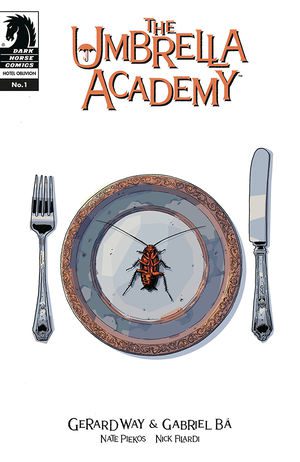 The long-awaited return of The Umbrella Academy by Gerard Way and Gabriel Ba gives us a continuation of the previous series, Dallas. We see a lot of the main characters dealing with the after-effects of what happened in Dallas. The most notable being that Spaceboy is still fat.

Umbrella Academy was on hiatus for eight years, as Dallas concluded in 2009. Therefore, I highly recommend rereading Apocalypse Suite and Dallas as a refresher as you will feel lost reading it without context.

The issue overall catches you up on what happened to The Umbrella Academy after the events in Dallas. We still see there is a divide amongst the group. The group as a whole are not aware of Hotel Oblivion, as Hargreeves had secrets that only he knew about. We get to see that this place is going to have a massive impact on the story.

The creative team as a whole delivered a good issue. You can clearly notice the rust on the art and story. It is especially evident with how the characters interact with each other as they feel like they have the same voice. The art shares this same problem as you can see that Ba hasn’t drawn these characters in a long time.

Overall, the long hiatus didn’t hurt Umbrella Academy’s legacy. I am sure that when Way and Ba continue with the Hotel Oblivion, we will see what made the series such a game changer back in 2007 with the release of the Apocalypse Suite.