Starting off I will bite the bullet and give warning to most that if you wholeheartedly read The Umbrella Academy Graphic Novel by Gerard Way and Gabriel ba expecting scene for scene shots and comic accuracy then this series will by most means disappoint. Especially when it’s essentially merging The Apocolypse Suite and Dallas into one cohesive story and running with what its got.

The series takes more from the story than it gives at times. But by watching it with that in mind and also keeping conscious that grounding a lot of these characters and fleshing them out in a realistic setting is a challenge within itself. The Umbrella Academy is an over the top violent joy in a world of hero fatigue that does what it can to achieve Gerard Ways vision on a budget.

Avoiding a lot of the fantastical elements of the graphic novel the base story remains for the most part intact.

October 1st, 1989. 43 children were mysteriously born to 43 unconnected women who were not previously pregnant the days prior. Giving Sir Reginald Hargreeves an eccentric billionaire, philanthropist the sudden mission to adopt as many of these children as he can. Managing to save only 7 of these children. Hargreeves trains this batch of youngsters to hone their special abilities for what you may ask? To save the world of course!
​
The series takes a very grounded approach much like AMC’s Preacher. Attempting to weave through a lot of Gerard’s gothic fever dreams of a graphic novel. Hunkering down on character interactions and what truly makes the 7 children a family. 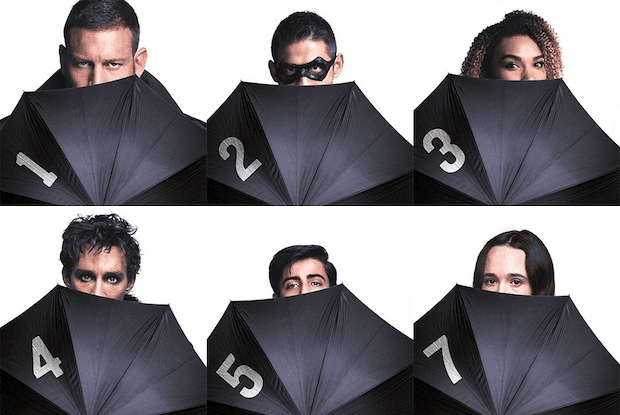 Aesthetically the show pails in comparison. Putting almost no visible effort into keeping consistent with the books scenery or visuals. With the hope that character development would cause people to overlook it and through each of the 7 episodes, it can be very hit or miss.
​
Klaus Hargreeves played by Robert Sheehan is a saving grace for a good amount of season coming into his character ark sooner than the other members of the family. With an intrinsic personality that keeps you constantly intrigued with his mischief and addict coping mechanisms for his powers.
​
Less can be said for characters like Space Boy the first numbered out of the academy played by Tom Hooper and number 3 Alison the Rumor played by Emmy Raver-Lampman.
Both characters didn’t seem to come around until halfway through the season eventually becoming more pivotal to the main story and garnering interest through flashbacks.

The rest centralizes on time traveling number 5 played by Aiden Gallagher and vigilante number 2 Diego the Kraken played by David Castaneda. Diverging into more of a who done it set of mysteries after the untimely death of there father Reginald Hargreeves A.K.A. The Monocle. Which unites the family again after a 10-year hiatus for an oncoming prophecy of a forthcoming doomsday in the following days.

Ironically the series also seemed to have a good amount of emphasis on the serial killer hitmen Hazel and Cha-Cha who in the book were satirical Neo-Nazis set on there next target. Played by Cameron Britton and Marie J Blige are an unorthodox fun pairing that keeps the show lively and darkly comical with more heart than its graphic predecessor.

​The Umbrella Academy if taken purely for what it is as a show is enjoyable at a lot of moments predictable. But at others pleasantly surprising adding more depth to characters on a page that lacked a lot of personality and emotional depth. Especially poor Vanya Number 7 played by Ellen Paige who has been given the ability to truly breathe in this series and given more life as a character than a senseless throwaway villain.
​
With its flaws, The Umbrella Academy was able to pull off a series. One I will gladly watch season 2 of and give a moderately pleasant 6.5 out of 10.  Keep Posted to Geeks World Wide for more reviews and updates.

dark horse gerard way netflix original The Umbrella Academy
Are you an Insider?News, reviews, & updates are just the beginning.