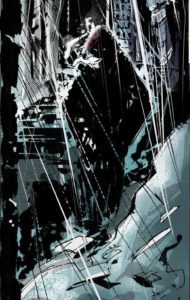 By: Ryan Williams and Jamie Jones

The words gritty and comic, bring about the notion in my head of a Frank Miller-esque world. One where trash fills the streets and for some reason, it is always raining. The grim faces of characters showing tiredness and stress of this world. Colors muted and blue, making it seem like the world is just a harsh place to be in.
The Whisper #4 was described as “The Grittiest Whisper yet”. And that was my mindset before opening the Patreon driven comic. And it couldn’t have been more on point. Whisper, an ongoing series of short 5-page self-contained stories deal with the legacy of a superhero called The Whisper. And in this short story, Ryan Williams and Jamie Jones shows that even superheroes have their “don’t talk to me, I hate people” mentality.

At some point, even a superhero, for example, the Flash, needs to stop running around from saving everyone they can and just relax with a nice stiff drink (We all know Tony Stark would like to just have a drink or twelve.) Here we see our hero fed up with how things are going and just pulls up a bar stool to have a drink. Working in “The Whisper” into the name of a drink was creative in the narrative and on brand. In the background of this, we read and see some other patrons of the bar starting to cause a scene that any superhero or upstanding citizen would try to intervene in. But no, today is just “one of those days” and a drink needs to be finished before more panels handle the situation. 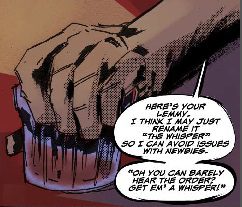 Have you seen this:
A Righteous Thirst for Vengeance #1 (Review)

This being only a 5-page story, I don’t want to reveal too much of what happens. But I will say I am really enjoying this anthology comic. Again each short story is complete on its own, but it brings an air of humanity to the legacy of a hero in its collective. At the end of the day, heroes are just like us.Work is long and relentless, sometimes you just want 5 minutes to yourself. Then its time to put the mask on and be a hero again.

Work is long and relentless, sometimes you just want 5 minutes to yourself. Then, it’s time to put the mask on and be a hero again.