The Wicked + The Divine #39 Review 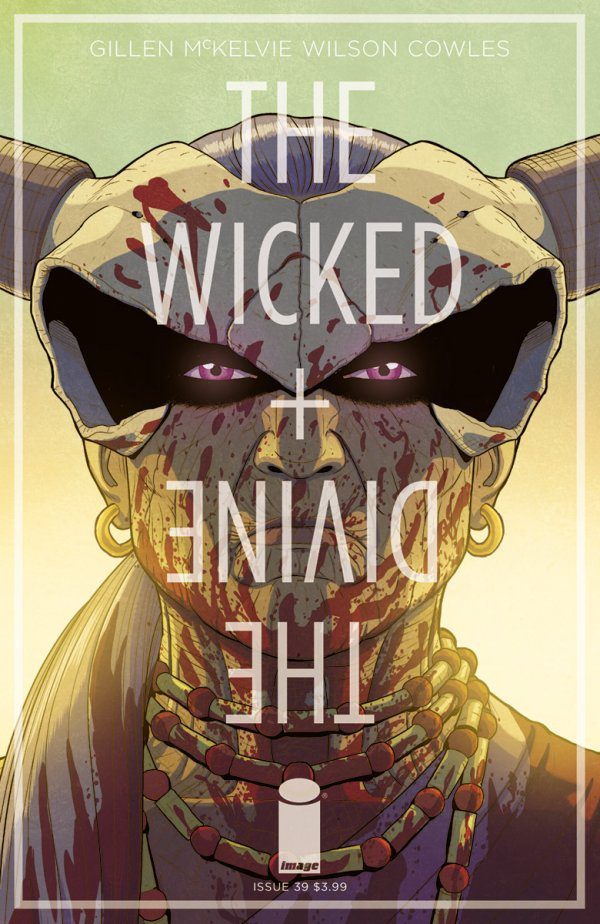 The Wicked + The Divine #39
Image Comics

The Wicked + the Divine #39 is tasked with doing several things at once. For one, it is the final issue in the penultimate story arc for the series. To this end, it takes time first to check in on the machinations of Minerva and Woden. This opening scene is a delightful reminder that so many of the characters are in the dark about Minerva/Ananke’s plan. This creates a level of suspense as we keep waiting for someone to realize what she is up to an attempt to stop it.

The issue also gestures towards a resolution to and stopping of Ananke’s destructive plan in a flashback sequence that goes back to around 4000 BC. The flashback reveals secrets and hints at how Ananke’s plans may ultimately be thwarted. Gillen’s writing is superb always giving just enough tantalizing information to keep us interested while maintaining an air of mystery that will have readers running to subreddits to discuss.

The build-up to this final issue has been emotionally draining–to say the least. The arc has include horrific revelations, characters dying, and the most recent issue ended ominously on the note that “Persephone is no more”. What happened to Persephone? Is she dead or has she befallen some worse fate?. The issue takes its time in answering these questions, but when it does so the issue reaches new heights in narrative and artistic brilliance.

While this issue spends some time checking in on the evil machinations and supernatural past, this issue is about a girl–Laura Wilson–who realizes that she is not what she once thought and comes to know what she does not want to be. She is not a god and the moment that realization dawns on her she stops being Persephone–thereby answering what exactly happened to Persephone. Realizing that she is not a god frees Laura to stop trying to be what people tell her to be and start being who she wants to be. In this way, the issue serves as a microcosm of the entire series which for all of it’s supernatural, would-be gods and their various machinations is at its heart about a girl trying to understand who she is and who she wants to be. This issue tracks the first important step in the journey of self-discovery for Laura: being able to stop trying to be who others tell her to be. Especially in the current cultural climate which is constantly attempting to police the actions and bodies of women, this narrative turn proves to be a breath of fresh air. Laura’s life and body are hers to make decisions with–no one else’s.

Jaime McKelvie’s stunning art captures these pivotal moments by consistently showcasing the nuances of Laura’s various emotions–capturing how she is equally crushed by no longer being a god and slowly discovering who she truly is. McKelvie’s art really shines in the attention to detail he gives to the facial expressions of each of the characters; these often say as much, if not more, than the accompanying dialogue. Of course, rounding out this group is Matt Wilson who shines particularly bright in his coloring of the various outfits and costumes for the gods and their minions. One particularly memorable set of pages includes a confrontation between Laura and a group of Minerva’s minions whose coloration makes them look more like Daft Punk and less like evil henchman.

I noted that this issue is ultimately a look at Laura’s self-discovery process, but it doesn’t end with her having all the answers–there is one more story arc to go. Instead, it ends with the question that the series has been asking all along: who is Laura Wilson? I can’t wait to find out.