The World According to Jeff Goldblum (Review)

Disney Plus Jeff Goldblum the world according to jeff goldblum

The World According To Jeff Goldblum
Disney +

Ever since the first Disney+ television series were announced at D23 Expo earlier this year, the one show that really stood out to me was The World According to Jeff Goldblum. The delightfully eccentric 67 year old is currently experiencing a phenomenal resurgence; what with a newly released jazz album, performance at Glastonbury and a debut in the Marvel cinematic universe. I absolutely love watching his bonkers interviews and performances, and being a fan of travel documentaries, this seemed like a perfect combination!

The 12-part National Geographic travel docuseries follows beloved Jurassic Park actor and jazz performer Jeff Goldblum as he travels the world discovering the wonderful stories behind everyday objects. The four episodes previewed explored the history of sneakers, tattoos, jeans and ice-cream, delving into how they’re created and their cultural impact on society.

“I’m sort of fascinated by a lot of things,” Goldblum told the crowd at D23, and that curiosity takes him on a journey of discovery, meeting a whole bunch of special guests along the way. The actor discusses the amazing creation of Ben and Jerry flavours with owners Ben Cohen‎ and ‎Jerry Greenfield, has a tattoo tuition from one of the oldest American female tattooists and even has his own pair of customised designer sneakers created. My particular highlight however was Goldblum visiting a tattoo parlor in his hometown of Pittsburgh. The venue holds a Jeff Goldblum day every year, with fans getting the biggest and most bonkers tattoos of the actor – and their reaction when he turned up was just brilliant!

Reminiscent of Karl Pilkington’s hilarious The Moaning of Life, The World According to Jeff Goldblum is one of the most enjoyable and feel-good shows that I’ve seen in a long time. Each thirty minute episode was utterly fascinating, absorbing you into the story behind the most random objects. Presenter Goldblum also shows a wonderful and genuine interest in the people he meets along the way. He’s just so whimsical and endearing that it’s almost impossible to resist his charm – I quickly found myself sucked into the series and couldn’t help but binge watch the four episodes!

If you’re a Jeff Goldblum fan and always wanted to see the world through his eyes, then this is definitely one for you! In a world that’s currently lets face it, a little miserable, this show is a breath of fresh air and really does bring a little joy – I genuinely can’t wait to watch more.

The World According To Jeff Goldblum 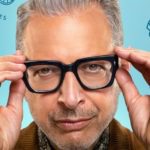