After The Messenger reveals that Rachel’s birth mother is still alive, Rachel and Gar sneak off to the Asylum where she is being held. Dick and Kory go after them, but they all end up captive and facing their worst fears.

This is the first team-focused episode that I thought was well executed. The team had great chemistry and I’m disappointed we didn’t get to see more of this beforehand. My biggest complaint is that Dick was the main focus. There were some missed opportunities here. His character progression, up until the last five minutes, felt unnecessary after “Jason Todd.” An episode focused on experimenting on and torturing the group would have been a great chance to show off Kory’s power evolution and background, or how Gar’s can do more than he realizes.

Dick taking down an army of security guards with just a wrench was incredible, brutal, and shows off what a difference good choreography can make. The first few episodes were lacking in this respect but this episode and the last saw a strong uptake in fight scenes. This one could have used a little less CGI blood but otherwise it was great.

With “The Asylum,” ‘Titans has solidified its place as the top DC show right now. The writing, choreography, and acting all are top notch, and hopefully future seasons and shows take notes. 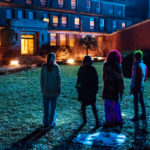 TRAILER: The King of Africa has Arrived ...