The Manhattan Buzzkill in Titans #9 REVIEW 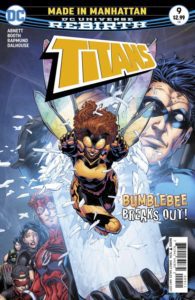 Picking up right where issue #8 left off at Meta Solutions in Manhattan, the Titans (Tempest, Nightwing, Wonder Girl, Flash, Arsenal, & Omen) get ready to battle the Fearsome Five (Psimon, Mammoth, Jinx, Shimmer, & Gizmo). Things deescalate and turn less hostile as Bumble Bee (Karen Duncan) tries to keep the peace between the two teams. Psimon explains that Meta Solutions is only trying to help her control her powers and that the Fearsome Five have reformed their criminal ways. Mammoth previously came close to killing Karen’s husband, Malcolm Duncan (AKA the Herald) in the past and it has left him with PTSD. Omen gets a good read on them and asserts that they are being truthful. The story takes a detour to Titans Tower where the Titans bicker over whether they are really telling the truth. Arsenal doesn’t believe it because he’s a former drug addict and tells them all, it takes a long time to reform like he did, not overnight. Nightwing and Flash decide to investigate Meta Solutions during a night ops mission where they encounter a list of names. They are confronted by Mammoth who asks if they’ve found what they are looking for before a showdown with these three, but is Mammoth the only one who was deceiving Omen? There is much more at stake in issue 9 than meets the eye.

Titans #9, like most comic books, doesn’t conclude at all, but sets up better storylines and angles for the next issue and subsequent ones after that. This issue’s focus seems to be on Bumble Bee’s powers and whether or not the Fearsome Five have been reformed. With Arsenal getting pissed off and making a huge deal about the Fearsome Five not being able to reform that quickly, it showed that he was very adamant about his feelings, but will that set him up as an adversary to one of his fellow team mates in future issues? With how this may clash with team mates, it may set up a feud of sorts for the position of leader of the Titans. Heroes always find a way to fight one another, not just the villains. 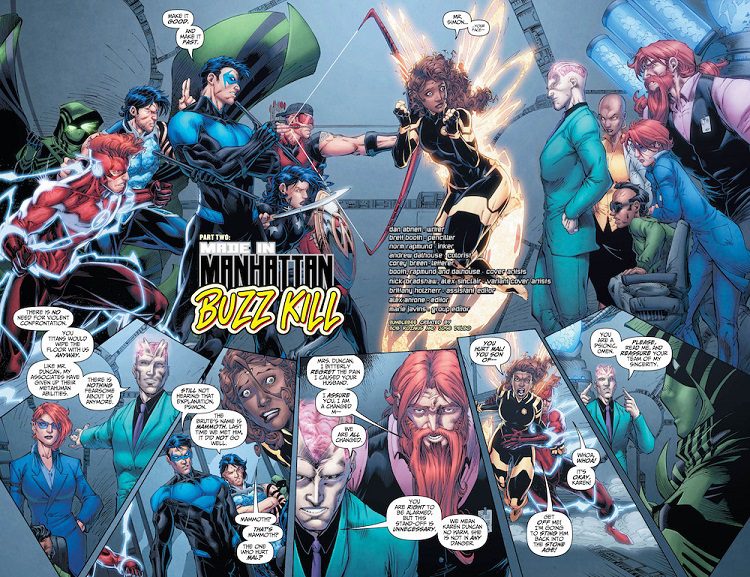 Titans #9 is tense from start to finish and never gets boring. Dan Abnett does a great delivering an action packed issue even where there is little action on few pages, the writing has depth so that it builds tension between the Titans or the married couple (Karen and Malcolm). The throwback of Roy Harper bringing up his past drug addiction was refreshing and kept this issue from wandering into the murky rote clichés that can plague some comics. The dialogue is bellicose at times, especially when Roy Harper is making a statement about his past. Norm Rapmund, Brett Booth, and Andrew Dalhouse all did a great job on this issue. I look forward to reading issue 10 to see where it is heading next.