This is it guys, this is the long-awaited moment that’s been teased throughout the whole season. We finally delve into what really happened in the showdown between Deathstroke and the original Titans team that’s caused so much conflict and pain – and it was definitely worth the wait! This show really is proving just why it’s one of the best DC shows on our screens at the moment.

Following Dick Grayson’s shock revelation at the end of “Bruce Wayne” last week, Titans takes a little time out from the action and growing discord between the group to reflect on past sins that have begun to haunt them in “Jericho”. All of the breadcrumbs that have been weaved throughout season two so far have led to this moment, as we rejoin the flashback sequences first shown in “Aqualad”. Reeling from Garth’s murder by Deathstroke, Donna wants to take action into her own hands, as the team plan on using the assassin’s son Jericho to get closer to him. But are they really ready to go up against the world’s deadliest hitman?

This was another emotionally charged episode that really explored the core failings of both Deathstroke and Titans that lead to the devastating loss of Jericho. The episode opened with an excellent portrayal of Slade Wilson’s failings as a father as we explore his backstory; dating back to the first experiments in the military, to tender moments between him and his son, to his eventual villainous descent as he becomes the stone cold killer we all know. As much as I love Manu Bennet’s portrayal of Slade in the Arrowverse, Esai Morales has really brought this character to life, especially when sharing the screen with newcomer Chella Man, and boy was he phenomenal too.

READ THIS
Birds of Prey Review - No Spoilers! (Video)

As teased at the end of “Aqualad”, Dick and the OG team befriend the young teenager through his love of vinyls, eventually gaining vital information on his father whilst also discovering Jericho’s intriguing powers. It’s interesting to see the supposed heroes of the show dabbling into their darker side to try and one up their enemy, but some of the characters really did come across as cold as Slade. Still, it was definitely worth it to see certain team members go up against the assassin, with this episode featuring two fantastic hand to hand combat scenes that may just top this season’s best moments.

As much as I’ve been wanting to see this episode for a while now, I do feel like the flashbacks have halted the action of the main plot, resulting in a series that’s felt a little stop start. Devoting two episodes to flashbacks has indeed impacted the overall cohesiveness of the show, especially with the amazing arrival of Superboy to the Titans tower. Thanks to certain leaked set photos, I know there’s still a couple of surprises to come towards the end of the season, but I really do want to see these individuals coming together to do what they do best and fight villains as a team rather than squabbling between themselves.

READ THIS
How To Potentially Rebuild The DCEU

“Jericho” is an affecting and overall solid episode from DC Universe, featuring some phenomenal performances and impressive fight sequences, but I do wish they’d incorporate the flashbacks into the main narrative. I feel like the story has hardly progressed since the exciting addition of Superboy, really slowing down the pace of the season with their personal conflicts. I honestly can’t wait to see them all team up to take on Deathstroke, so with only five episodes left of the season – I really hope they can come together. 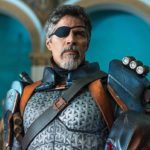