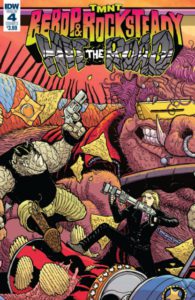 It took a while, but agent Ravenwood finally caught on. Though it appears she is the one agent on this case that doesn’t think Bebop and Rocksteady have some brilliant motive to take over the world.

Frankly, I don’t understand how NO ONE working this mission realizes Bebop and Rocksteady are abject idiots. I get they’ve worked for some brilliant villains, and that they’re dangerous on their own because of their enhanced strength. But SOMEONE involved in this whole operation has to know Bebop and Rocksteady collectively have 10 brain cells (that is not fact, as far as I know).

The other thing I’m a little surprised about: no one knew Bebop and Rocksteady were humans prior to becoming mutants. I understand most of the mutants in the TMNT universe were originally animals, but how did their nicknames never pop up if these two had criminal records. Seems like the government was a little lazy, which is such a ridiculous characterization of the US government!

We also get a slightly deeper look at Ravenwood and her pent-up rage. Though I don’t think she’s going to take it out on Bebop and Rocksteady in the upcoming series finale. She’s been pretty sympathetic to the two characters throughout this whole affair and I think she’ll go easy on them once she gets a better idea about their level of intellect. (And I get the feeling she’s going have the same questions I did.)

Something tells me Ravenwood even partners up with Bebop and Rocksteady in some capacity. (Maybe to help them escape custody?)

Bebop and Rocksteady’s contributions to the issue weren’t major, but Weaver continues to do an outstanding job with their script. This is also the second issue where he’s been in charge of the art. Nothing against Bates but I like Weaver’s pencil work a little more. It just seems to mesh better with Peer’s colors.