This was definitely the best issue of the TMNT Bebop & Rocksteady Hit the Road mini-series. Though it didn’t end as I anticipated it would.

Bishop, the man in charge of Agent Ravenwood and everyone else in Earth Protection Force, did try to escalate the situation, but not how I expected. I thought he would’ve kept things in-house and tried to dispose of Bebop and Rocksteady, permanently. Instead, he saw it as a chance to expose mutant-kind for being “the monsters they are,” giving Bebop and Rocksteady a slight nudge in the right direction.

That helped get Agent Ravenwood out of his hair, which had clearly become a priority. And after seeing what she really is, I wouldn’t want her around anymore either. She’s a terrifying character.

At first, it appeared she had superhuman strength and Mr. Fantastic-like elasticity, along with higher-level intellect. That all makes for a pretty cool character.

But Agent Ravenwood isn’t really a “she,” she’s more of a “they.” And “they” are disgusting, little, parasite-type creatures that remind me of the Flood tadpoles from Halo that used to give me nightmares. Needless to say, I was rooting for Bebop and Rocksteady hardcore once I saw there were actually five Agent Ravenwoods.

Ben Bates did an excellent job with the Bebop and Rocksteady v. Ravenwood fight. Very chaotic and messy, as it should be with five parasites scurrying everywhere.

This series’ greatest strength was without a doubt Dustin Weaver’s script. He did an excellent job of capturing the humor and stupidity of these two thugs. 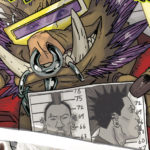 Why Thanos Did NOT Create More Realities ...