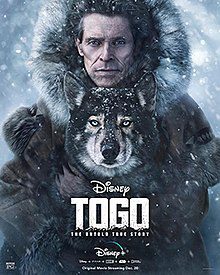 What do Homeward Bound, Eight Below, Balto and upcoming The Call of the Wild have in common with the latest live-action film to debut on Disney+? Dogs and plenty of them! Following the House of Mouse’s adaptation of Lady and the Tramp, the studio have opted for a based-on-a-true-story canine drama that features lots of puppies and William Defoe spouting “good dogs”, and it’s sure to melt your heart!

Directed by Ericson Core, Togo brings to life the incredible and heroic dog-sled relay, coined the Great Race of Mercy, in Alaska, 1925. Following a deadly epidemic outbreak of diphtheria in the small town of Noma, a number of mushers and their sled dogs set out on a perilous journey through a great storm, travelling 674 miles to retrieve the life saving antitoxin. Heading up the death defying race was dog Togo and his musher Leonhard Seppala (Dafoe), who completed the longest and most dangerous stretch of the journey.

Togo is a character driven tale that focuses primarily on the central “man and his dog” tale rather than the wider race against time (and elements), and it’s all the better for it. The film flits between present day and flashbacks, nicely building up the central bond between Seppala and Togo - recounting his mischievous puppy years in which the musher tried to give him away twice(!), to him finding his heroic place leading the pack. It’s a beautiful bond that will undoubtedly melt the iciest of hearts; you know what they say about the purest love being between grumpy dads and the pets they said they didn’t want!

Dafoe is solid as Seppala, once again cementing his status following a standout performance in The Lighthouse. In a particularly emotional scene he spurred his pack on across the crumbling ice with an abridged St. Crispian’s Day speech from Shakespeare’s Henry V - and it was brilliant! His relationship with his wife Constance (Julianne Nicholson) was also particularly touching and supportive, especially as she was the one who first saw the potential in Togo. The supporting cast was also pretty notable, featuring Christopher Heyerdahl, Michael McElhatton, Richard Dormer, Zahn McClarnon, and Nive Nielson.

Core brings the impressive feat of dog and human endurance to life with gorgeously sweeping wide shots framing the beautiful, but often deadly, vistas of Northern Alaska. The action was suspenseful and tense, coupled with an overwhelming use of icy blues and an endless white that transported you into the rough terrain. The only downside to the film was the at times small-screen feel about it, particularly when scenes took place in the towns.

Togo is a heart warming tale that wonderfully portrays the ancient bond between humans and dogs in a gripping and emotional journey, which is perfect for the festive period. Although the final act is heavier than some Disney films, the celebration of one of history’s bravest dogs and musher is definitely well worth your time.

Disney Plus togo
Did you miss breaking news?We publish new content every day.