Rumors have run rampant as Marvel’s Avengers: Infinity War is currently well into filming. Our only glimpses of the goings on, on the set, have been a couple of official set videos presented by Marvel. The first featured Robert Downey Jr. (Tony Stark), Tom Holland (Spider-Man), and Chris Pratt (Star Lord), standing on the set of what looks to be like a destroyed city or planet.

Not much can be gleaned from the video outside of the fact that Holland is wearing a very large overcoat and hiding his hands. This led to widespread speculation that under that puffy coat, Holland is hiding a new Spider-Man costume, possibly of alien origin (Black Suit Spider-Man, anyone?)

In a second video for omaze.com/rdj touting a chance for a lucky fan to visit the set of Avengers: Infinity War we get a quick glimpse of Tom Holland standing on the desolated city set in a Motion Cap suit surrounded by the movie’s crew. You can also see RDJ in the pic, also with some Mo-Cap dots adorning his clothes as well as what looks like a stand in for Star Lord.

The early speculation is that Holland’s Mo-Cap suit is just so they can add his costume in later digitally, but I think there is a much cooler reason behind Holland’s Mo-Cap wear, one that will make the geek community and Spider-Man fans very happy. It is my belief that he is wearing the mo-cap suit because he will become IRON SPIDER in Avengers: Infinity War. 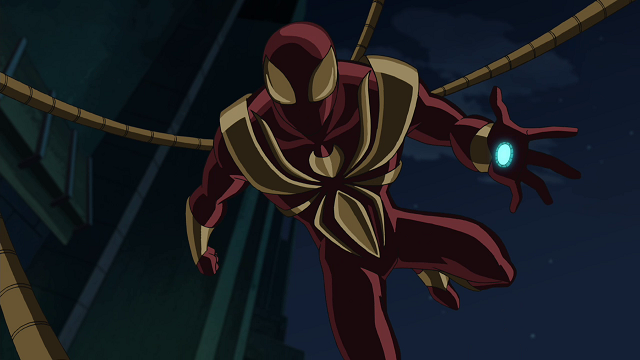 While the Mo-Cap suit is a good indication Parker will be dawning something special for Infinity War, as Downy himself as dawned a similar outfit for his Iron Man attire and in fact RDJ is sporting some similar mo-cap wear on his clothes, indicating he may have some digital augmentation as well. Also, RDJ and Holland seem to be sharing a lot of scenes with each other in Infinity War, and finally the fact there is no better place to debut the IRON SPIDER suit than in a battle with a demi-god in space. It makes perfect sense that Marvel could introduce this iconic costume in their epic finale. I mean typically we don’t see actors in full Mo-Cap unless their suit or body (Hulk) is going to be heavily modified digitally.  Of course, they could just be digitally applying Spider-Man’s costume, but I don’t recall a lot of set pics on Homecoming with Holland in the Mo-Cap suit, and that seems overly expensive when they could just have him in the actual costume. So here is hoping I’m right and IRON SPIDER makes his Live Action Debut in