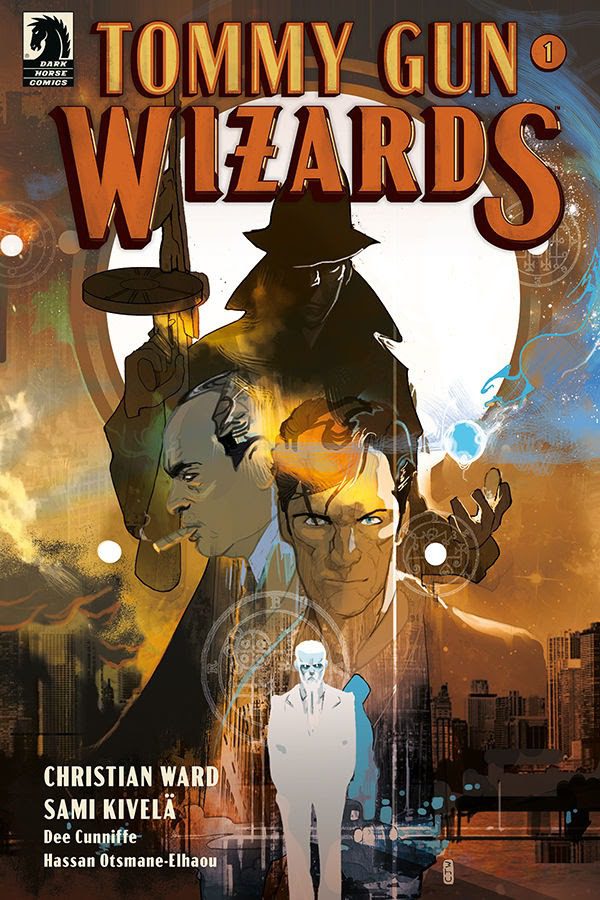 So the premise of this new series from Dark Horse is simple. What if 1930’s Chicago was a place where Al Capone bootlegged magic alongside booze? What if Elliott Ness and the rest of “Untouchables” were trying to take down a criminal enterprise infused with the supernatural?
That’s Tommy Gun Wizards in a nutshell.

While Ward does a decent job of setting the stage, there are moments where the art fails the story; points where the audience is supposed to take visual cues from the artwork that do not land as hoped and leave the reader feeling confused. Without giving away too much plot, there is a moment that a snitch gets a human head in a box as punishment for helping Ness. Does the head belong to a priest we see in the following panel? Is it someone else? The art isn’t clear and the narrative doesn’t clear up the confusion either.

In fact, the art and the coloring are my two big points of contention when it comes to this title. The work of Kivela is more reminiscent of a 1990’s Vertigo title where the figures are stilted and stiff, the artwork is draped in heavy inks, and the series has a dated look…not dated in the sense of looking like the 30’s, but looking dated in the comic art style that is popular now. The visuals of this series would have been wildly popular 25-30 years ago.

The coloring of the series is another problem. I’m a bit shocked that Dark Horse didn’t step in and demand that someone else besides Ward work in the coloring. He has no sense of mood or lighting. His panels during a scene where a fire breaks out are so bright in a red tone that they hurt my eyes. It looked forced and amateur. Hiring an experienced colorist for future issues will only help this series.

The setting, premise, and characters of this series are a solid start for a series, but the shortfalls of the art and the coloring are growing pains that this young comic title will have to mature through to reach its full potential and its largest audience. I’m holding out hope that this comic will survive long enough to find its feet and its readership.