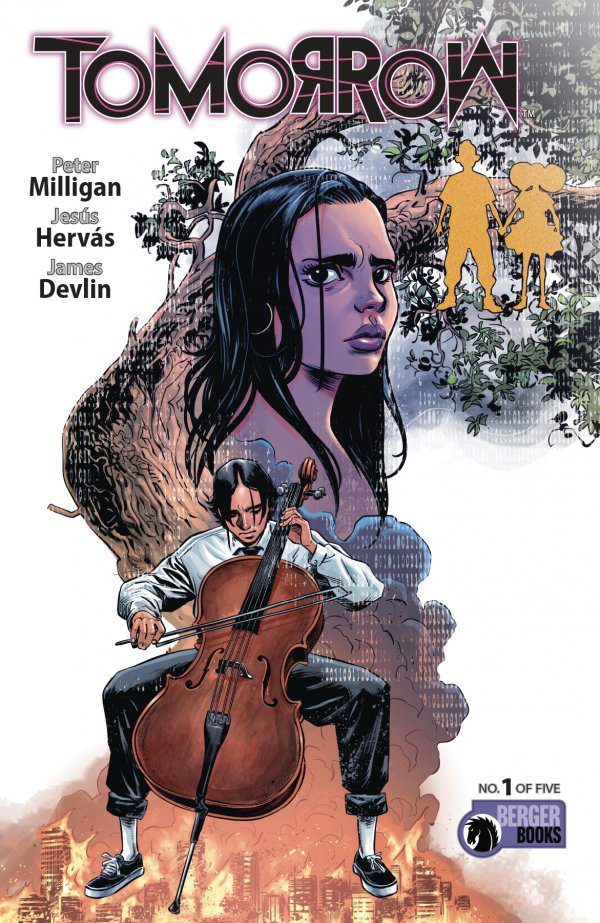 The song lyrics state, “I believe in yesterday”. Yesterday is evidenced and observed by Todays success and scars. As for Today, hard to argue with the reality smacking you in the face. But Tomorrow, that’s a tricky one. At minimum it is a concept, at best it is an opportunity, a chance. After reading the reality present in this first issue of Tomorrow, well Tomorrow ain’t looking too good.

Peter Milligan drops the reader immediately into the sense of urgency of NOW.  I know it’s weird talking about now in a review for a comic titled Tomorrow, it will make sense.  See now is where we find Oscar Fuentes standing over the corpse of his mother.  Her bloodied form made more horrifying by the look on Oscar’s face.

Oscar’s thoughts race as he takes in the scene before him, while offering the reader no initial clue as to how we got to now.  We discover we are witnessing what should have been a music audition for Oscar only something went wrong.  The art is great here, using heavy black lines to highlight the fear and uncertainty he is experiencing.  As he forces himself to calm down he uses Schnittke’s Cello Concerto Number 2 to do so, allowing him to recall Yesterday…or three days ago.

Have you seen this:
Three Jokers #2 (Review)

Here is where we begin to get an idea of what happened.  Oscar has a twin sister Cira.  They both live with their mother Sofia, the one you met at the beginning.  But this isn’t then it’s now and now Sofia is preparing for the trip to the audition.  Cira cant attend due to some illness and Milligan takes this opportunity to indicate how deep the connection is between these two.  One can only begin to speculate how this will play out in the future, but isn’t that the point?

But don’t be misled, while the initial issue puts much of the focus on the Fuentes family, Tomorrow is about more than just them.  We are introduced to Trevon Treacy - a cyber security expert for what I can only assume is the United States government.  Trevon has been tracking what appears to be the beginning of a pandemic.  We also meet a young man named Nate, a soccer player traveling with his team.  Nate’s father, Ford Fielding, is also introduced as the head of a large company who has taken key members of his team on a retreat.

It is by introducing these additional characters that the story begins to unfold and the events of yesterday become clear.  It is another opportunity for the story to examine the concept of Tomorrow.   A computer virus has mutated and is now infecting human hosts.  I thought the scenario presented helped make the title chosen even more appropriate.  The concept of our technology, our future now threatening us isn’t something I can say I have seen that often in storytelling.  Trevon represents the concept of yesterday, an individual who had an opportunity to see the writing on the walls.  His attempts to warn his wife and children highlight how in the face of disaster we work to protect our today and tomorrow.  His efforts to investigate the pandemic showcase an individual at the front line of a problem, ringing the warning bell before it’s too late.

Tomorrow offered this reader a captivating disaster storyline.  By offering a refreshing story containing recognizable characters Tomorrow already has me speculating.  For Agent Treacy it is a question of mission or family?  For Nate and his father, I wonder how far the apple has fallen from the tree?  Finally, will the twins be reunited again?  Tomorrow is uncertain, none knows what it may bring.  Isn’t that the wonderful thing about Tomorrow after all.