Ever since the 1950s, horror and comics have gone together like tricks and treats. There’s no better way to celebrate than by curling up with a nice, terrifying comic. Why not choose one of these? Here are the top ten comics to read on Halloween.

Archie Andrews and the Riverdale crew have been a staple in comics ever since they first appeared in Pep Comics all the way back in 1939. Over the past nearly 80 years the gang has had some wild adventures, including Archie becoming a superhero, and run-ins with the Punisher, and the Predator; but the most wild crossover of all was the one into the afterlife. Starting in 2013, Afterlife with Archie has been delighting fans with its campy horror fun. The first arc starts with Sabrina Spellman pulling a Pet Sematary on Hot Dog before a zombie outbreak ensues with Jughead serving as patient zero. The entire series is full of treats for fans of the regular Archie series, like a vampire version of Josie and The Pussycats, but also is sure to put the Halloween spirit into any reader with its spooky and gothic atmosphere. 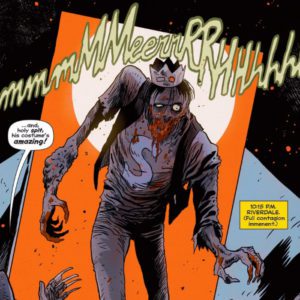 If you dig this series, you’ll have to check out some of the other titles Included under the expanded Archie horror banner like Jughead: The Hunger (Frank Tieri really shows his love of Buffy the Vampire Slayer) the currently ongoing Vampironica (check out our reviews) and the Chilling Adventures of Sabrina (Netflix’s latest hit series). These series are all leaps and bounds better than the short-lived Archie’s Weird Mysteries animated series.

Coming from Robert Kirkman, the braaaaains behind the Eisner and Emmy winning hit, The Walking Dead, Outcast pulls no punches. A complex, emotional tale about a young man struggling with demonic possessions in the quiet town of Rome, West Virginia. Known for his ability to craft nuanced characters, Kirkman builds a sense of dread in this one, and the book’s scare factor is amplified tenfold by the gruesome possessions and exorcisms drawn by the one and only Paul Azaceta. 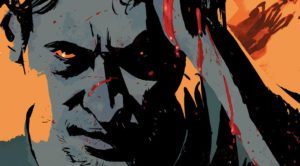 Outcast was originally conceived as both a comic and a television show, which just wrapped up its second and final season on Cinemax before meeting an untimely death.

8. Hellboy: The Crooked Man and Others.

You can’t have a list of the best comics for Halloween without including Mike Mignola’s Hellboy, and we’ve picked out a particularly creepy one for you. Released in 2008, The Crooked Man and Others is a collection of Hellboy tales that are chock full of all the monsters and scares you’d want to see in a Halloween comic. 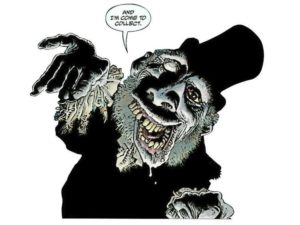 The first story, The Crooked Man follows Hellboy as he encounters Witches, and the Devil of Appalachia: The Crooked Man. This entire tale is inspired by and made in tribute to famous pulp writer, Manly Wade Wellman. The second tale, They That Go Down to the Sea in Ships, features Ape Sapien and Hellboy facing off against the headless ghost of Blackbeard (This one was originally a tie-in for the Konami Hellboy game.) Next is is a one shot called In The Chapel of Moloch which centers around a recluse artist and his Cthulhu like creations. Finally, there is an issue that was only released for Free Comic Book Day in 2008 called The Mole, which features a body horror nightmare from a drunken Hellboy after having one too many with some ghosts at a bar. Each story is completely unique, and help give a sense of who Hellboy is for those readers who may not be as familiar with the Mignolaverse. 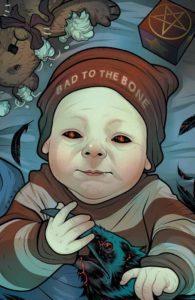 Teen pregnancy is scary enough, but when the baby turns out to be the Anti-Christ it becomes a horror lovers dream. In Babyteeth, Donny Cates manages to mix the pop culture references of Juno with the eerie tone and paranoia of Rosemary’s Baby. The deeper you get into the mythology of Babyteeth, the more you’ll be hooked by the other dimensional creatures, killer assassins, and the family facing off against them all. The perfect mix of horror and comedy coupled with a killer cast of characters makes this a must read for any comic fan.

We’ve all heard of Tim Sale and Jeph Loeb’s Batman classic, The Long Halloween. A gothic inspired deep dive into Batman’s rogues gallery that spans an entire year. This isn’t that. Released in 2009, this Spider-Man halloween caper is the first major comics gig for Saturday Night Live veterans, Bill Hader and Seth Myers. 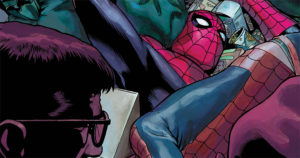 This hilarious one shot takes place on Halloween night as Spider-Man runs into yet another run of the Parker Luck, only this time it isn’t Peter, but an innocent 20s something who was dressed up as everybody’s favorite friendly neighborhood Spider-Man for the holiday. The story is a simple one, but tons of fun and Kevin Maguire’s art is as perfect, as always.

Robert Kirkman makes a second appearance on this list; this time while working for Marvel, even if it’s in a small corner of the multi-verse known as Earth-2149. In this particular universe a disease known as “The Hunger” infects our favorite heroes and villains, turning them into - you guessed it - flesh hungry zombies! The series is full of brutal moments, including Spider-Man chowing down on his beloved MJ, The Hulk biting the head clean off the Silver Surfer, and Black Panther having an arm and leg removed by a zombified Hank Pym. Pretty gross stuff that is sure to delight any zombie loving horror fan.

A massive success, the book had multiple re-releases, including a volume just featuring the incredible covers, which all paid homage to famous moments across the Marvel universe. One volume called Marvel Zombies vs. The Army of Darkness even features everyone’s favorite chainsaw handed hero, Ash Williams!

Speaking of Ash, this next entry is a must read for any fans of the slasher genre. A long time ago, before the Kevin Feiges of the world where building cinematic universes, there was an idea, called Freddy vs. Jason vs. Ash. The idea was to bring together a group of everyone’s favorite horror icons, see if they could work together to fight the battle we were all dying to see. 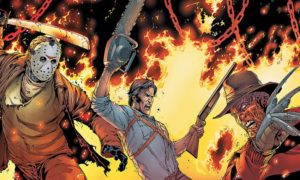 While confusing and separated film rights kept Ash out of the battle in 2003’s Freddy v Jason, fans were finally lucky enough to read the whole tale in 2007 when Wildstorm launched the comic which was based on the treatment for Freddy v Jason 2, the sequel that never happened. Over the course of six issues you’ll laugh and scream at this epic face-off, but don’t worry,  of course Ash pulls the victory out in the end. Hail to the king, baby!

A love letter to the horror genre, Locke & Key has everything a horror fan wants to see in a comic. From portals to other dimensions, ghosts, to violent possessions, and everything in between all set in the backdrop of a creepy New England mansion known as “The Keyhouse”. The sprawling mystery from IDW has been such a massive success in the comics world that an adaptation has been in works since 2010, but has always managed to get stopped before it reaches the screen. Fans may finally be in luck though, as it was reported back in May that Netflix has an adaptation on the way. 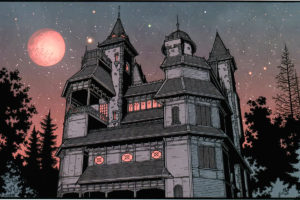 It’s no surprise Joe Hill has such affinity for writing horror, as the son of Stephen King, it’s definitely in his blood.

Speaking of Stephen King, the master of macabre himself makes an appearance on this list. American Vampire is a major epic spread all across American history, written by Stephen King and Scott Snyder (two of my personal favorites). This marks the first time that Stephen

The story opens in 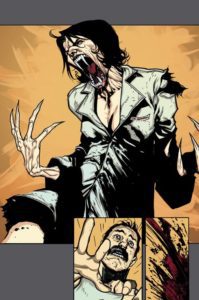 1920’s Hollywood, the perfect setting for a vampire tale. It also includes an old west setting, WWII era vamps, and even 1930’s Vegas. This is one that is sure to be enjoyed by any history and horror fans, featuring a little bit of something for everyone.

If you just can’t get enough of this book you’re in luck because there is also two mini-series and a one shot featuring a vampire hunter named Travis Kidd; a greaser in the 1950s who could give Van Helsing a run for his money as he uses wooden fangs to bite back against the vamps.

Continuing the long tradition of anthology horror comics like Creepshow, and Tales from the Crypt, Ice Cream Man is sure to make you scream! Each issue features a different cast of characters going through a completely original genre-bending nightmare narrated by the one and only Ice Cream Man. For the past year Image comics has been killing the horror game with this series, which currently has two collected volumes available.

A series is already in the works as the property was optioned by Universal Cable Productions at the top of this month. Ice Cream Man, plus the highly anticipated return of The Twilight Zone proves that horror anthology TV shows aren’t going anywhere anytime soon.

Bonus Treat (or Trick)!  I Walked with a Spider

A terrifying twist on an origin story we all know and love, the ultimate perversion of the Peter Parker. In Issue four of “Edge of Spider-Verse”, fans were given their first (and hopefully last) look at Earth-51412, an earth that feels eerily like a horror movie. The title itself is even a nice little nod to the 1943 classic, I Walked with a Zombie. 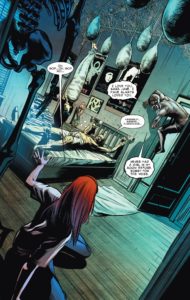 Clay McLeod Chapman must’ve confused his Raimi influences while working on this issue, because it feels straight out of the Evil Dead universe. The body horror itself is enough to give David Cronenberg goosebumps. This issue is sure to both spook and delight horror fans who love the wall crawler.

That’s the list; be sure to check some of them out (best while read under your blanket with a flashlight). Have a Happy Halloween, worldwide geeks!