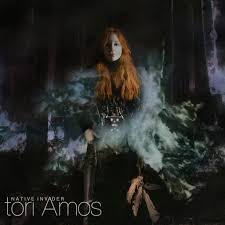 Guided by the winds of her Muses 9, the singer-songwriter pleads for a “militia of the mind” in an intense blend of abstract imagery, vibrant sounds, and raw emotionality reflective of the current socio-political climate and her personal trauma.

The wait is finally over, Tori Amos fans! As of today, the prodigious singer-songwriter can celebrate her 15th full-length studio release, Native Invader, a concept album which offers a sober narrative that bolsters nature as the protagonist. Unforeseen political events and personal tragedy are the backdrop for Native Invader, setting the album’s overarching somber tone with classic wordplay and private confessionals. The highly anticipated 13-track album, which follows 2014’s Unrepentant Geraldines, will be available in both standard or deluxe CD editions, as well as a double vinyl LP. Eager fans can enjoy two bonus tracks in the deluxe version.

I had the privilege of listening to the album prior to release, and I can enthusiastically say that Native Invader promises to make its mark as one of the most relevant albums of 2017. Fans can expect a highly produced album that touches on climate change, political dissonance, and natural forces invading our inner sanctum and false notions of peace. “Nature is a character on the album and speaks in different ways,” Tori explained in an interview with Nylon in August. “The songs also wrestle with the question: what is our part in the destruction of our land, as well as ourselves, and in our relationships with each other?”, Amos previously explained in a press statement.

The singer-songwriter deftly weaves in symbolism with rich arrangements that illuminate the current climate we live in, while also providing glimpses of her heartbreak regarding her mother’s stroke which left her unable to communicate verbally and nonverbally. Tucked away are subliminal messages of protest and resilience reflective of nature’s healing power. As such, the structure of the album seems to crescendo, becoming more outwardly political and personal with each track. Further, Tori adds new elements in her well-tended sound garden, and harvests tones and arrangements from previous creations. Not purely experimental, Tori amps up her emotions through guitar arrangements, string orchestrations, electronic loops, drums, synth elements, and her classic piano.

Tori introduces you to the surreal realm of Native Invader with her first track “Reindeer King.” Through ambient sounds coupled with her infallible piano-based sound, her singular voice croons “Crystal core, your mind has been divided by your soul”. Cue goosebumps. The power of her voice and piano combo takes your breath away. Ethereal and ominous, “Reindeer King” lifts you up, like in a hot air balloon, and allows you to survey the paths of destruction left by nature’s wrath, and warns of what lies ahead. Illustrating the regenerative capacity of nature, she also encourages “you gotta get you back to you,” a haunting chorus that urges you to renew.

“Wings” and “Broken Arrow”, the album’s second and third tracks, echo the darker sonic graces of 2009’s “Abnormally Attracted to Sin.” Tori wonders if it’s “too late to make myself a safe place”, given the current state of the world and laments how Lady Liberty “may seem weak” and “we may be too weary” to move forward.

By the time you reach the pseudo-psychedelic “Cloud Riders” and pulsating “Up the Creek”, you’ve reached cruising altitude on Native Invader. In the former, Tori sings of navigating through unchartered territory “standing on the edge of the cliff,” while bracing for an approaching storm. “I am not giving up on us, I am not going anywhere soon” she promises, as she sets to ride out this storm together.

While “Cloud Riders” is the album’s lead single, “Up the Creek” is Native Invader’s centerpiece. Starting with the phrase, “Good Lord willin’ and the creek don’t rise,” a nod to Tori’s grandfather, the track bursts into a frenzy of guitar, piano, and string orchestration. With the help of her daughter Natashya’s vocals, Tori blatantly calls for a “militia of the mind” to “arm against those climate blind”. She also gently reminds us that “when hope is almost gone, you know that’s the time we must stand.”

Tori follows up her call to arms with her balled “Breakaway”, a melancholic reverberation of the shockwaves felt across the planet on election night. In a desperate search for what went wrong, she laments, “I feel played by our so-called friends. Not the friends we should have made.” She also deals with the familiar feelings of self-recrimination, “I should have done or said more.” “Breakaway” pays homage to the aftermath of what some of us were left with that night, and the deafening silence we had to face the next morning.

In “Bang”, Tori breaks the alienating concept of illegal immigrants and redefines it as a collective whole. “Immigrants, that’s who we are. ‘Cause we’re all made of stars.” Meanwhile, in “Benjamin”, she condemns the ignorance of climate change, and unashamedly attacks the fossil fuel industry, accusing “those pimps in Washington” of “selling the rape of America.”

The standard edition ends with “Mary’s Eyes”, Tori’s gentle ode to her mother and one of the most intimate tracks on the album. The composition reflects the pain and trauma of this experience and the yearning to find a way to communicate. “What’s behind Mary’s eyes,” she aches, while pleading to “hide your tears” and “just bring her delight.” The power of this track lies in Tori’s ability to recognize the agony of what plagues this side of her personal life, but also strives to provide strength to withstand future challenges, therefore ending the album on a hopeful note.

While nothing in Native Invader is irrelevant, upon my initial sweep of the album, three songs left me stunned: the otherworldly “Reindeer King”, gut-wrenching “Breakaway”, and mournful “Mary’s Eyes”. The common thread behind these tracks is Tori’s vulnerability and the magic that occurs with the potent minimalist combination of her bare piano and vocals. I can only dream of what it must be like to behold these songs live.

Some critics claim that Native Invader lacks grit or packs a good red-goddess punch. I respectfully disagree. While Native Invader does call for a “militia of the mind” as one of the central messages, the album was not intended to roar for a revolution. Rather, Native Invader offers a platform for quite introspection. It also provides the calm required to thoughtfully evaluate where we are, how we arrived at this point, and what we plan to do about it in the face of inevitable storms to come. This preparedness factor reminds me of 1994’s Under the Pink’s “Bells for Her” which warns, almost prophetically, that we “can’t stop what’s coming, can’t stop what’s on its way”.

Interestingly, Native Invader’s launch could not be any more timely and captures the mood of our current landscape. The album not only deals with the fallout of the US election, climate change, and harrowing personal strife, it also inadvertently encapsulates the horror of the rise of the Alt-right, the tragic events in Charlottesville, Virginia, the repeal of DACA, and the ominous threat of nuclear war. Further, Native Invader comes on the heels of Hurricane Harvey and the wake of Hurricane Irma, two of the most violent storms the world has seen in almost a decade.

Like 2002’s Scarlett’s Walk, Tori surveys the US landscape and expresses her perspective. Is it fair to demand Tori to fight our fights, or reflect the social outrage we have witnessed over the past year? Probably not. Lest we forget her own personal tragedy regarding her mother. As such, Native Invader ravages and heals without aggressive sexuality or gasps of breath. The album is conceptual and personal, quiet and fierce, sonically experimental and classic.

“Hopefully people will find strength and resilience within the songs to give them the energy to survive the storms that we are currently in,” Tori stated in a previous interview. Her hopes are fulfilled with yours truly. Native Invader is the catharsis I was searching for to help process feelings of helplessness within our current “twilight-zone” world. It’s the album I needed to cry to. It’s the album that comes post-catastrophe and reminds you that the sun is coming, pushing you to get up and move forward.

In short, through Native Invader, Tori invites you to be still with nature and reflect on all the events leading up to this point. I urge you to accept this invitation: turn off all distractions, light some candles, pour yourself a nice red, and let the invasion happen.

Fans can purchase the album here. The Native Invader World Tour is also already underway in Europe and culminates December 3 in Los Angeles, California. Shows are selling out fast, so don’t miss your chance to see Tori live! No doubt she will reveal further layers to her album. The complete schedule is available here.