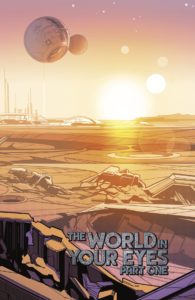 Transformers #1 is a fresh launch, a blank slate, and a terrific starting point for fans of any age. After 13 years of various Transformers series with a cohesive deep lore, IDW is starting over. The Transformer continuity was wonderfully rich and weaved emotional themes throughout character storylines, but the complexity potentially made entry for new readers difficult. Transformers #1 by Brian Ruckley starts everyone off on the same footing and provides a solid foundation for a brand new narrative for the “robots in disguise.”

Writer Brian Ruckley is a fantasy novelist, but his experience building rich worlds and developing deep lore applies directly to Cybertron. Ruckley work in historical fiction is also relevant given the shared cultural knowledge of the Transformer franchise. Transformer fans may have discovered the characters through cartoons, movies, or comics, each of which shares common elements within different interpretations of the franchise. Historical fiction often takes events or eras that a reader may be familiar with and mixes real and fictional events to create a new experience that feels grounded in reality. Cybertron’s reality may be up for debate, but it certainly lives in the hearts and minds of fans across generations. Ruckley’s ability to mix the familiar in new and unexpected ways may be a strength for this new series. 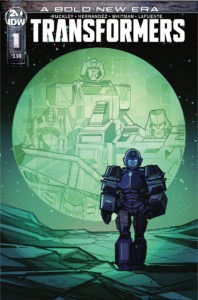 Transformers is set earlier in Cybertron’s history. Optimus Prime is not a Prime yet and is still Orion Pax. Megatron has started to be an outspoken advocate against the current governmental structure but is not an evil villain. Orion Pax and Megatron have a history together and Ruckley alludes to some of this within the first issue. Political tensions are on the rise and Megatron is in the center of them. Bumblebee and a new bot, Rubble, are out on a journey of discovery and end up discovering an attack of unknown origins.

Angel Hernandez draws the Bumblebee and Rubble scenes with an art style that feels familiar for 1980’s cartoon fans, but still takes a blocky modernized style. Cachet Whitman takes on the art responsibilities for the Orion Pax and Megatron interactions. This artwork is more detailed than Hernandez’s but remains in a traditional `80’s cartoon style. In fact, Whitman’s pages would feel right at home next to animation stills from generation 1.

Writer Brian Ruckely and artists Angel Hernandez and Cachet Whitman create a new, yet familiar, world for the Transformers to inhabit. Longtime fans will feel comfortable in the settings created and new or returning fans will be able to start fresh with this new series and continuity. Transformers #1 may not do much beyond establishing the characters and raise questions, but that is enough reason for readers to return to Cybertron and to return for issue #2.