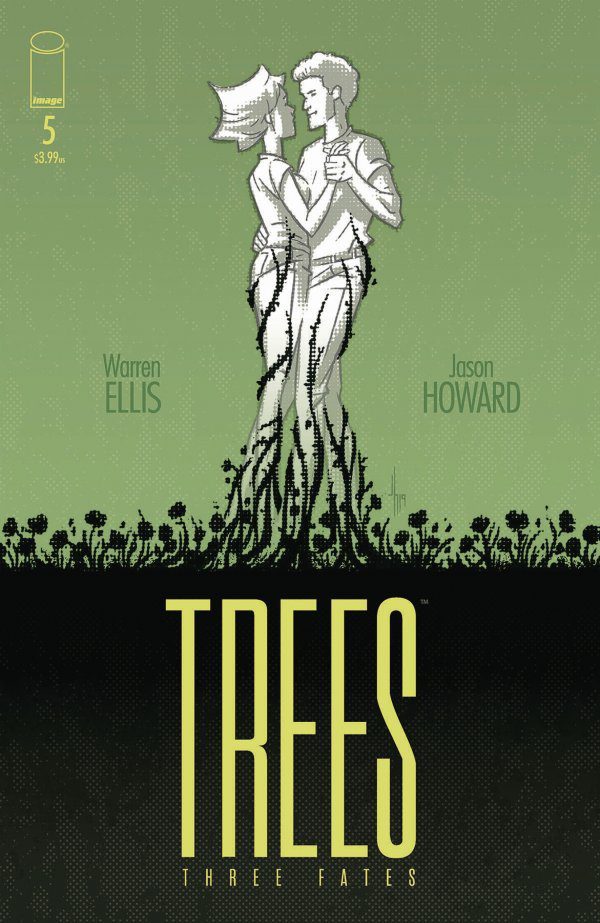 I’m four issues behind in this story, but in a way I’m glad - because now I want to go back and purchase the first four to catch up on what I missed! I couldn’t quite gather what the “trees” were, but everything seemed to have gone south when these things arrived. The town is corrupt, the trains are important, and everything is bleak, gray, and just plain depressing.

Two deaths, one coffin, the spirit of a loved one, things seem to be going… well, for the female protagonist, Klara. From this issue I could gather she wants to set things right, and fight back against the corruption (hence the bloody, graphic deaths!).

What tends to attract me the most to comics, is the art style. I gravitate towards art that strays from the typical styles you would find in superhero comics. The style in this comic was simple, yet extremely gritty! And the colors - oh the colors! With their powers combined my eyes were thoroughly depressed - and that’s a good thing. It truly captivated the bleakness of the situation, and I didn’t have much hope for the characters. This seemed appropriate as there were two deaths, one steadily dead in a coffin, and a ghost - of a dead person. Death and corruption. If I didn’t feel depressed, then I don’t think I would have enjoyed this as much. I felt sucked into the story.

I have hope for Klara. She’s reconciled with her past, returning a dead loved one, and defeating the issue plaguing her world one step at a time. I’m rooting for her.

Don’t do what I did and start in the middle of the tale! However, with that said, I do recommend this comic. It makes me want to read on. This is also the last issue in this series’ Third Volume! So I would highly recommend seeking out the prior two volumes as well.