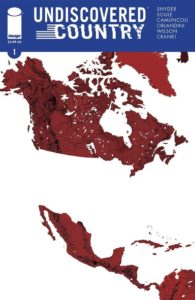 The United States has sealed itself off from the rest of the world. For 30 years, the world had no interaction with the US. During this time, the rest of the world split into a European/African alliance and a Pan-Asian zone. In addition, the world outside of the US is struggling against a mysterious virus deteriorating society. Then suddenly and unexpectedly there is a message from the United States offering a cure for the virus and an invitation to cross into the country for the first time. This is the world that creators Scott Snyder and Charles Soule thrust readers into.

This collaboration between Snyder and Soule joins two world-building creative powers. Snyder’s run on Batman created the ancient society of The Court of Owls and expanded the mythology around the Joker. Soule expanded Logan’s mythology through his Death of Wolverine series and his work on Daredevil and Darth Vader added depth to each of their worlds. Both authors applied knowledge of their character’s history to stretch and tease out pockets of lore. This same knowledge of history and ability to tease out the “what ifs” of those small details creates the fractured and crumbling world of Undiscovered Country.

Snyder and Soule’s series considers the cultural and political questions of “What would happen to a society that is sealed off psychically and technologically from the wider world?” How could a world filled with international trade, multinational corporations, and social media survive? Snyder and Soule tease some of these ideas during this first issue and rightfully raise more questions than answers.

The characters introduced for this diplomatic mission into the US skirt stereotypes (social media creator, career politicians, military rebel, medical doctor) but each is provided enough story to add depth and create curiosity. The mission starts straightforward but quickly spirals out of control. The diplomatic mission is attacked without warning and crashes into the unknown land of the former United States. Snyder and Soule provide a little explanation of how isolation could change the environment, but they save some surprises for the reader to wonder about. The issue ends with a cliff hanger reveal that questions the assumptions of the outside world and opens the door for some powerful storytelling.

Camuncoli and Orlandini’s art effectively creates an outside world teetering on the brink of collapse due to the virus. They create an initial sense of awe around the landscape of the United States and follow it with a sense of dread. Matt Wilson’s colors highlight these contrasts, making each locale feel unique and grounded in the harsh reality of the world.

Fans familiar with the expansive worlds created by Snyder and Soule will be hooked by the final page of this issue. Readers with an interest in culture and society will want to return to this world they created. And any citizen could benefit from the questions this series is starting to raise.