No, that’s not a sound of frustration, it’s just I really like saying the title of this game by Nifflas Games…and I really enjoyed playing it.

This is a 2-D platforming game centered around using objects to solve puzzles. The ultimate goal is to reach the exit. But I think the ending isn’t the point. The point is to explore. There is so much to this game, that getting to the end shouldn’t be the reason to play it. To play it, is to explore and solve.

This game was released on March 3rd of this year as part of the Humble Monthly Bundle, and my gosh is this a very unique game. This game saves absolutely everything. What do I mean by that? Well, any mistake made outside of the save room, stays that way. However, if there are goodies you need to keep and not lose, place them in the save room, or else, bye-bye forever. 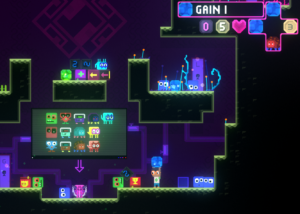 At the main screen, you have a choice between multiple character designs (mine had short hair to match my own, thank you very much). The characters are so cute, and bizarre. They were created by Corinne Cadalin, and my gosh are they adorable! The art is very unique in this game, and there are minute details that make this game truly something special. The buildings are stationary, but if you notice the background, there are trees swaying in a breeze coming from, well, I’m not sure where, but the trees move! How awesome is that in a 2-D platformer?

Can I mention the exploding, talking cubes? Of course I can. I’ve given them names. I don’t think that have any, but here they are: The blue one is Bloo, the green on is Troll, and the red one is Deadpool, because it looks like Deadpool’s mask. They all have varying degrees of “exploding.” Some just explode, while one explosion causes one cube, to turn into another. Some cubes jump to you, some jump away. As if the chaotic neutral, AI characters running around weren’t enough, even the cubes have character! 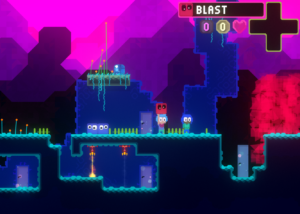 Lastly, the game play itself. It’s all a puzzle platformer, from what I’ve gathered while playing it. You must solve puzzles to gain keys that unlock doors from inside the save room, and so on and so forth until you reach the ending: which I believe there is two of, if I’m not mistaken. The controls are quite simple on the keyboard. You basically use the arrow keys, the space bar, and ‘x.’ But no mouse! The mouse will not, and does not work! You have been warned. 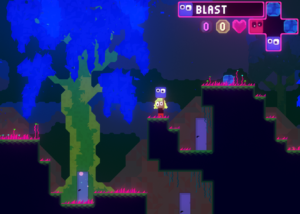 Keep a close eye on your life meter, which is a pink heart in the upper right hand corner. You can gather healing hearts throughout the game, but it doesn’t take much to die. But luckily, everything saves, remember? It’s not a total loss, but it gets somewhat annoying after a while when you keep dying over and over again.

Whether you’re a hard-core gamer, dead set on finishing a game in under an hour, or a casual gamer, you must try this game out. Uurnog is for every gamer of every gaming level, and you won’t be disappointed.

Exploding cubes set to techno music for the win!