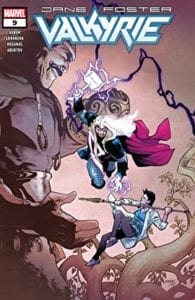 Perhaps it is the human side of superheroes that really allow them to make the right decisions… or forces them to make difficult decisions. This is where Valkyrie comes in. Faced with a tough decision, there is an internal, fighting monologue saying what to do. The Valkyrie sees one solution, while Jane Foster has another. In the end, she does make the right decision, and the demons have been vanquished, but something is still wrong. The world is devoid of happiness, Thor is basically a mindless zombie, and his brother (no, not Loki), has taken Valkyrie’s weapon. For what purpose? We are left in the unknown, but Jane isn’t going down without a fight.

I feel the story went by a tad too fast, and there was a lot to take in, in such a small time frame, especially the tale about the second brother of Thor who was banished to the realm of the dead, but wasn’t dead, and was plotting with the dead… I don’t know. It was a bit much, and too fast.

The colors certainly reflect the story, and it was done well. After the demons were vanquished, the world had become depressive, and the color scheme matched perfectly, with muted tones, and the addition of more grays and blues. The art style is very similar to the style of today, but isn’t overly detailed, which is a relief, considering most “modern” comics add too many details, where everything is just too sharp.

The title of this story is very apt, but… it seems the end of all things is just beginning, and worsening by the moment.