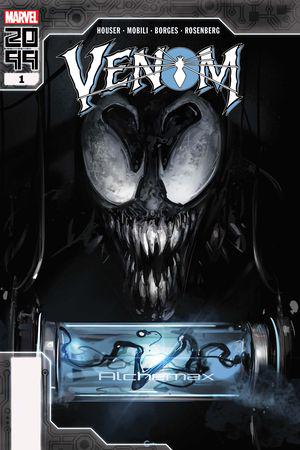 A young girl is given an experimental cure that unlocks a terrible secret.

Alea is suffering from a debilitating disease and her father, an employee at Alchemax, has been granted the rare opportunity to have his daughter treated by the company. Using an experimental treatment, Alea is given a mixture that includes a sliver of Venom’s DNA. When the experiment yields positive results, she is sent home and returns to school.

Unfortunately, an altercation with a bully will trigger a change in Alea. One that will allow the Venom symbiote to communicate to her and ask her to help him fix himself and free the other parts of him locked up in Alchemax. When the doctor who treated her reveals his real purpose for the symbiote, Venom takes over and a new lethal protector is born.

This is a really good first issue. It had a lot of plot moments that I wasn’t expecting and it was refreshing to not know where the story was going and be delighted with where it ended up. There were some plot elements that felt a little too familiar to other Venom stories, but Jody Houser does craft an enjoyable and fun first issue with some surprises that I am interested in seeing explored.

The other thing that makes this issue memorable is the excellent art from Francesco Mobili and Geraldo Borges. They bring some beautiful visuals to this issue and there are some brutal, but beautifully framed panels spread throughout this story. The flashbacks are particularly well-drawn and the character looks fantastic.