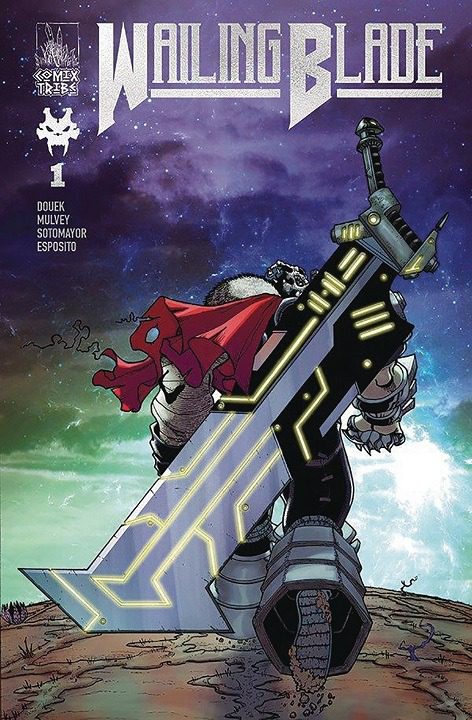 Kickstarter has become the testing ground for talent in the comics industry. No longer are potential creators forced to stand in lines at conventions, hoping to catch the eye of an editor to secure some work. Now those with the skill and knowhow take their talents directly to the public and in classic Darwinian fashion, only the strong survive. Meet the latest survivors who are going to carve their own place in the comics business. It’s the talent behind Comix Tribe’s latest offering Wailing Blade.

I cannot overstate just how good the artwork in Wailing Blade is. Joe Mulvey is the next “it” guy in comics; Period. Full stop.

There is no doubt in my mind that in the next five years we will see Mulvey name attached to a huge mainstream title at one of the big two. His work harkens back to Joe Mad when he was in the thick of his run on Uncanny and during Battle Chasers, the influence of Humberto Ramos is also apparent, but it’s not just a knock-off style that so many artists try and make a career out of—no there is so much more here. Mulvey’s style is a hybrid all its own. It’s action for the eyes and while this is just one offering it speaks to the potential and talent that are destined to come.

While Mulvey is doing the bulk of the lifting on this title, Douek sets the table up nicely for the talented artist. The setting of Wailing Blade is a fantasy realm that is the built on the broken remains of technology that took humans to the farthest reaches of space, helped us colonize alien planets and then failed us. Think Robin Hood with alien life and giant cybernetic blades. It’s a wild grab bag of ideas, but one that works because Douek keeps the focus on the human drama and doesn’t get mired down in his own world building. This is an adventure story first and foremost.

Then there is the star of the series, the main poster boy for Wailing Blade and that is the mysterious Headtaker.  The Headtaker is the equivalent of the royal executioner and the welder of the Wailing Blade, an enormous cybernetic blade that screams when swung through the air. It’s the duty of the Headtaker to go from town to town, village to village, to dispense royal justice in the name of the ruler.

It is during a detour of the Headtaker’s duties that a group of bandits get the bright idea to try and steal the sacred blade and kill the Headtaker…It doesn’t go well.

This is the kind of comic that Image was built on in the late 90’s. How in the hell this team was not scooped up before they reached Kickstarter is a mystery? This is action, its adventure, its bloody, its brutal, it’s a feast for the eyes and the imagination and I for one cannot wait to see what these talented individuals have in store for us next. This is my pick for Indy book of the summer and you need to get your copy of issue one before it disappears. Mark my words… this series and its creators are headed for BIG things in the future.