Why I Recommend the Razer Core eGPU

In a word, my support of the Razer Core external GPU is simply: modularity. I’ll get to this in a moment. First, understand that the target audience for this post doesn’t have an infatuation with desktop gaming rigs. I love them - don’t get me wrong. But my lifestyle requires that I’m mobile. In fact, very mobile. Meaning I can’t trot around a 6-8 pound gaming laptop with ease. I am on so many planes, trains and Lyft rides that I find the most comfort with the 3 pound and under market of laptops - also known as ultrabooks. Until this year when Intel’s 8th generation Core series of CPUs started shipping you couldn’t buy a quad-core powered ultrabook. Even today you cannot buy an ultrabook with a discrete GPU for gaming. Yes, I’m familiar with the ASUS UX331UN and the new Huawai Matebook Pro X, but they use an MX 130 or 150. I’m talking about more powerful GPUs that can push Doom in 1440p to 80 FPS on ultra. Thus, if you’re also someone who requires an ultrabook, but wants the ability to play games, this may be the setup for you. Before I go any further, note there are other external GPUs to consider, aside from Razer’s Core V2 ($499). I am writing from first-hand experience with this particular solution and I don’t want to make any assumptions as to the usability of products I haven’t used.

We PC gamers love the modularity of desktop rigs. And we cheer when gaming laptops have easy access to replaceable components, such as RAM and storage. Modularity is the ability to replace the components of a system. The benefits are reduced upgrade costs and shorter upgrade cycles. This keep gamers up to date and able to play the latest games with tons of frames and high settings. Additionally, there is the often overlooked benefit of troubleshooting. If a component fails, you swap it out. With traditional ultrabooks, the user is not given access to replace the system’s RAM, storage or CPU. Some laptops, such as the Razer Blade Stealth, do give you access to replace the storage, at least. But that does void your warranty. It’s important to note that RAM and CPU are not replaceable in the Stealth. Back when I was building desktops for small businesses (2000 - 2005), laptops were gaining market share. But I would stress to my customers that the modularity of a desktop PC spreads the depreciation across those components, as opposed to a single device, such as a laptop. That message of risk reduction and reduced downtime was quickly losing the battle against mobility. Of course, even today, a desktop PC has more points of modularity than an ultrabook + eGPU. 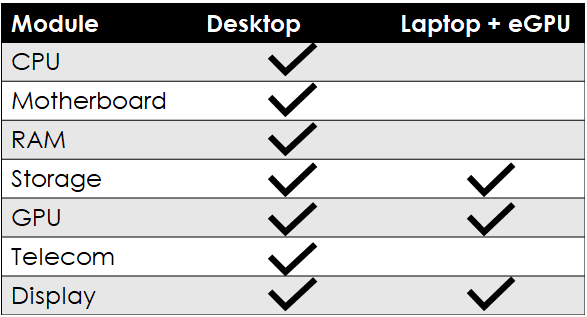 While desktops have more points of modularity, the laptop + eGPU setup isn’t too shabby.

Gamers are going mobile. Many of us that grew up playing DOS and early Windows games have grown up and we need or want to have more portability. If you’re in this camp, then it will make sense to you when I say that by adding an eGPU, such as the Razer Core, to your ultrabook setup, you can ditch the dedicated gaming rig you have at home and live and work off a single device. Case in point: I’m writing this article 40 miles from my home on the same ultrabook I was playing Vermintide 2 on this morning. The difference: I had the Razer Core v2 hooked up to it this morning via a single USB-C cable. When I’m at home with my Core, I can also easily connect my Lenovo Explorer VR headset. This little, tiny sub-3 pound ultrabook becomes a VR powerhouse with the Core. My favorite thing to do with VR headsets is watch noobs give it a run. The ability to do that without a dedicated, large gaming rig is an even more satisfying experience that keeps my office less cluttered and quieter.

The Razer Core itself is modular by nature. If you’re using a mid-ranged GPU, such as an NVIDIA GTX 1060, and you’re ready for an upgrade, simply slide it out from the Core’s chassis, remove it and replace it with a more powerful card. You can do this without even shutting down your laptop. It’s really that simple. Sure, there is the financial burden associated with the change. But replacing that one component is less expensive, and less of a hassle, than replacing an entire laptop.

The Razer Core connects a full-blown desktop GPU to your ultrabook via a USB-C Thunderbolt cable. Many other laptops are known to be compatible with the Razer Core. If you don’t like Razer’s laptops, you have options. Personally, I really dig their design language and the Stealth is just 2nd Razer laptop I’ve owned. Note there is a 15-25% hit on performance due to the limitations of the dual-core CPU and Thunderbolt 3.

The Core also includes several ports that really help sell the ease of this setup: 4 USB 3.0 ports and a gigabit Ethernet port. I have my Yeti mic, 1080p Logitech webcam, Razer mouse and a 1TB external storage device connected via the USB ports. I’m also using a wired Ethernet connection to access my home network. If something breaks, or it’s time to upgrade my CPU, I can replace my laptop. Since a GPU is heavily more responsible for overall gaming performance, I’m more likely to upgrade my GPU first. This is also an easy thing to do since the Core is so well engineered. I’m also going to experience less depreciation on the individual GPU than if I were to try and sell a 1-2 year old laptop with a gaming GPU in it.

My Setup and Plan for the Future

I’m running the dual-core Razer Blade Stealth (late 2017) along with the Razer Core V2, which is equipped with an NVIDIA GTX 1060 by MSI. I’ve upgraded the SSD in the Stealth from a 256GB Samsung P651 (middle of the road) to a 500GB Samsung Evo 960. I nearly doubled the read and write speeds. The GPU, specifically, is the MSI GeForce GTX 1080 8GB, which occupies 2 slots. I take my Razer Blade Stealth on the road 2-3 days per week. I come home and place it on a $15 Amazon Basics laptop stand and connect the Core via a single USB-C cable. Within 2 seconds my 13.3″ ultrabook transforms into a gaming rig capable of desktop-level performance. My excellent podcasting mic, webcam and 1 TB of storage turn on and are completely ready to go. To get to this point took little effort, thanks to Razer’s implementation between their laptop and their eGPU.

As of now, June 2018, I am 1 generation behind on Intel’s mobile CPU and I’m current with NVIDIA’s GPU. I’m a generation behind on my SSD but I’m happy with the storage size and performance. When the time comes to upgrade my laptop, either by force or desire, I can go through that cycle without losing the gaming power presented by the Razer Core. This goes both ways - and I’m pretty confident GPUs won’t change physical form factor for quite some time. Meaning I won’t have to change to a new version of the Core.

The fact is, I am 3 full months into this setup and I absolutely love it. I am coming off a gaming laptop that weighed 10 pounds and had a full-on GTX 1070 in it. I couldn’t move that sucker around so I had a companion ultrabook and a sophisticated NAS with cloud-saving to ensure my files were not lost between devices.

If you’re a gamer that wants to live off a single device without having to lug around a heavy gaming laptop that screams gamer! during your meetings, this setup makes perfect sense. If you want to spend a little more upfront to reduce your financial risk - you’re welcome to look into this setup further as well!