Why Marvel’s ‘Civil War II’ Gave Me An Aneurysm.

I like an epic story. I don’t think any medium can create an epic, tell it on so many differing levels of awesomeness as the comic book can. Although we all complain about ‘events’ and how we get tired of them, let’s face it, we always take a peek to see if any of those ‘classic 100 moments in comics; moments happens. That’s what events are for; to give fans something on an even bigger scale than they’re used to. It’s like going to the movie theatre instead of watching a DVD; it’s bigger, louder and faaar more expensive. I loved Secret Wars. I was blown away by Infinite Crisis, as well as Crisis On Infinite Earths (Final Crisis can suck my farts). The Sinestro Corps story was amazing. 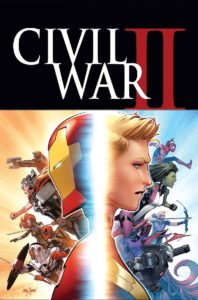 And yes, for the record, I loved Marvel’s first Civil War.

As with most of us, I have felt let down by a number of ‘event’ series for a number of reasons. Siege was muddled and underwhelming. Millennium was convoluted and vaguely silly.

Yet no event has so vexed me like Marvel’s recent Civil War II did.

Now, I don’t mean to Marvel bash or anything but, WHAT THE HELL WAS THAT!?!

Civil War, first was a game changer, not just for Marvel, but for comics in general. It saw a completely new playing field laid out for the Marvel universe and marked a new and dynamic approach from the company itself. It was brave, it was bold and even though it had its flaws (a lackluster ending for one) it set Marvel up as a company to be excited about again and presented more thrills, changes and “what the f#@k” moments than you could poke a Willie Lumpkin at.

In contrast, what did Civil War II give us? A couple of heroes getting murdered. Pointlessly.

Not a single other thing happened. No fooling. Nothing else. 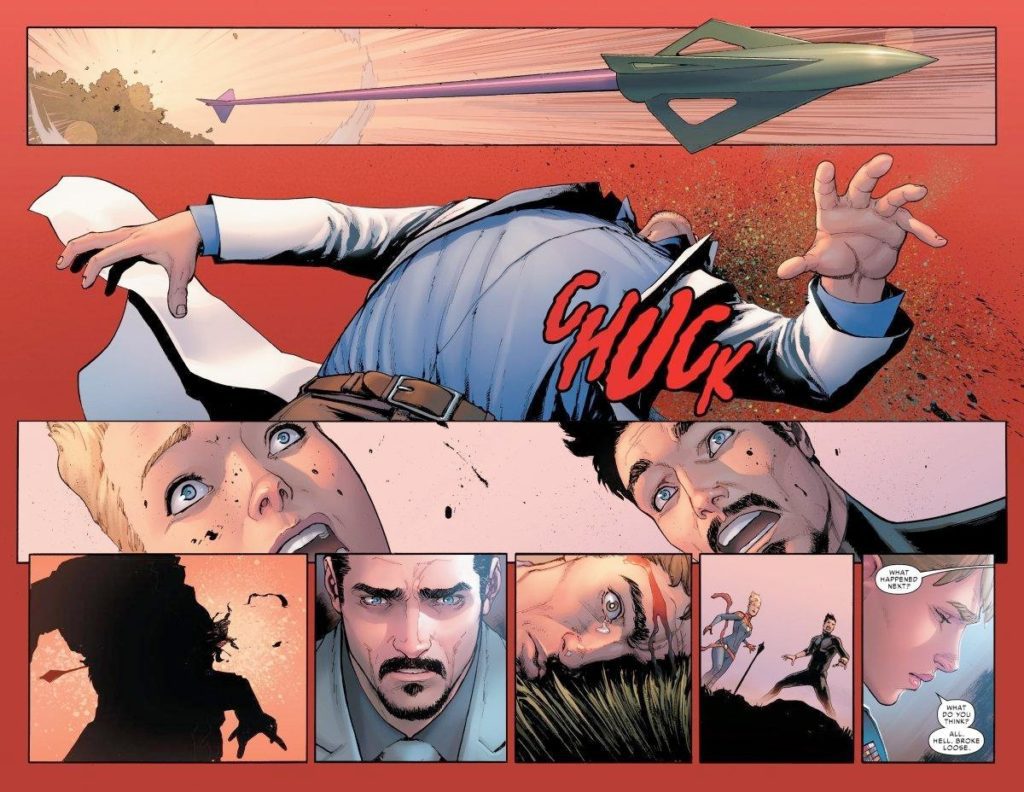 Oh, supposedly Tony Stark is now in some kind of coma, but this is counter acted by the fact that there is a Tony Stark hologram in the pages of Iron Man now who talks and acts exactly like Tony Stark. This came after the cliff hanger ending of issue #7 where it looked certain that Captain Marvel had punched a hole through Tony. Nope. Not even that happened, as we find out in issue #8 that Tony was just fine after that, thank you very much. Apparently he’s invented some new tech which enables him to re-write the endings of previous issues. No? He hasn’t? Oh, then it must just be terrible writing and editing on Marvel’s part. What a shock.

What I really don’t understand though is what the purpose of the event actually was. The Big Two usually have a pretty clear agenda regarding their events, but this one seemed to present no significant change of any kind. The inclusion of the Inhumans felt undermined by the lead up to the ResurrXion series (which felt far more important for the Attilan’s) and the Avengers just came out feeling far more fractured than they already were. The Guardians Of The Galaxy showed up too, of course, though for what reason, other than having their ship blown up is beyond me.

The whole series seemed to struggle to get traction, The massive exposition in every issue and the inconsistency regarding the writing of the characters personalities and characteristics was frustrating. Shock and rhetoric do not an interesting story make. 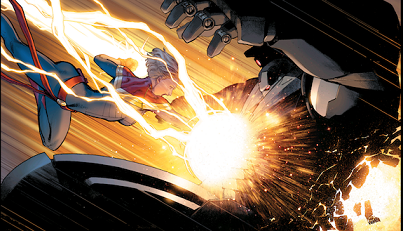 When the confrontation finally happened, it felt forced, labored and not true to the characters involved. In the first Civil War, when the heroes finally confronted each other, it felt important, like it was filled with purpose and an overwhelming sense of dread and excitement for what this would do to all involved. When the opposing sides finally confront each other in Civil War II, it feels like their fighting over the last doughnut in the box. 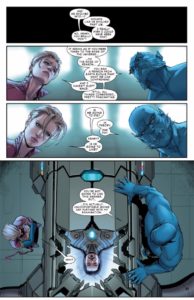 But that tie-in argument is a cop out. You know what it is when you have to buy titles outside the main story to understand the main story? Firstly, it’s exploitative. Secondly, it’s bad writing. I know companies do this now to wring every dollar they can from an event and, to be honest, I don’t necessarily think it’s a bad thing in and of itself if it broadens the story. But when you HAVE to buy them, then that’s something else. I really liked Marvel’s recent Secret Wars event. It was beautifully told and I could follow the main title without ever picking up another book. Yet the story was so interesting that I DID pick up some of the other books and enjoyed most of them too. That’s good writing.

Civil War II felt like Brian Michael Bendis playing with his toy box. I’m sure it was fun for him, but in the end, I just don’t understand its purpose. It was neither exciting or fun; game changing or seemingly of any importance. Sure, it gave a couple of teasers of the Marvel future, but couldn’t that have been done in a Free Comic Book Day preview? Did we really need eight issues for that?

I don’t know. Maybe I’m wrong and if anyone can convince me otherwise, I would be happy to hear it. What it seems like to me though, is that Marvel is running low on energy. Bendis has been steering this ship for a long time now and, to me, the weariness is starting to show. Credit to the man, he has brought some great ideas to the universe, but I feel that time is coming to an end. Marvel seem to feel that change for change’s sake is ‘exciting’ and ‘Now!’ whereas the success of DC’s recent Rebirth, which focused more on good quality story telling shows that maybe fans want something more than just change. 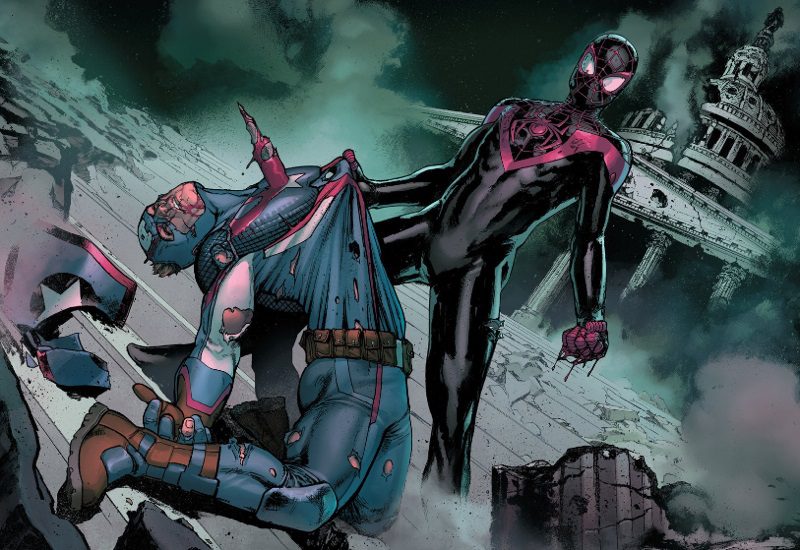 If you liked Miles Morales being placed one step closer to becoming the centre of the Marvel Universe, then I’m sure Civil War II was a hit for you. For me, it felt like a misstep; a pointless one.

So until Bruce Banner comes back from the dead and tears Brian Michael Bendis a new hole for such a lame death, make mine… something else. 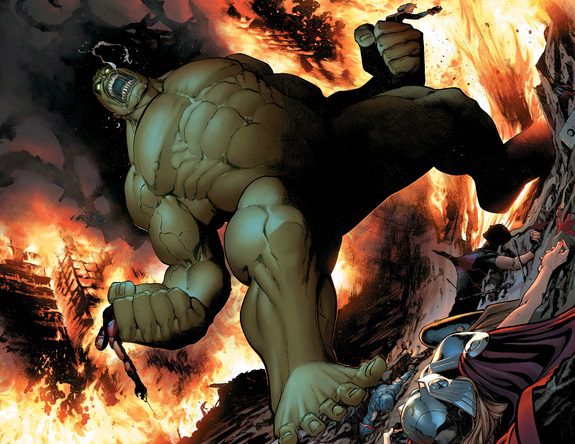